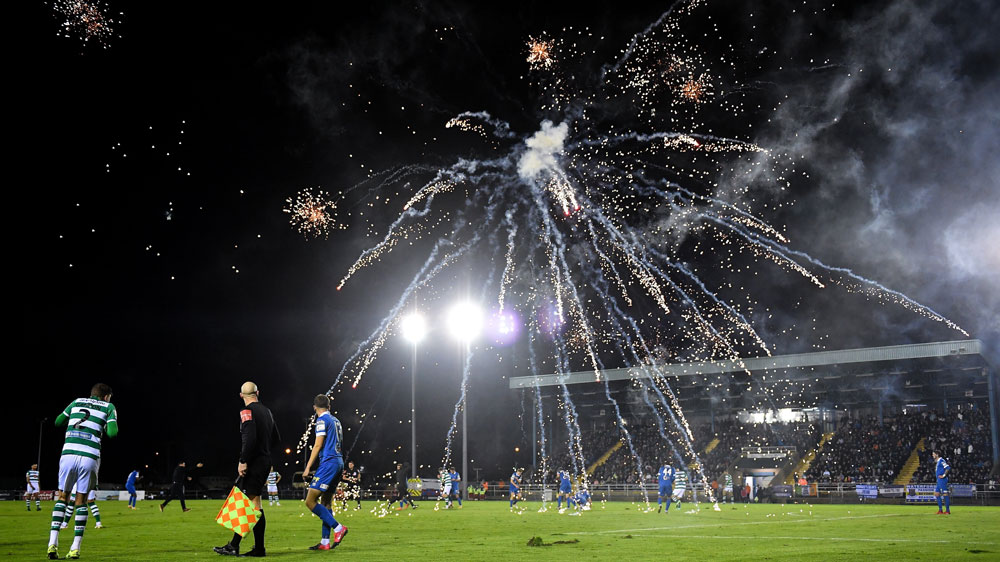 A firework explodes over the pitch during the SSE Airtricity League Premier Division match between Waterford and Shamrock Rovers at the RSC in Waterford. Photo by Seb Daly/Sportsfile

SHAMROCK Rovers have been ordered to play their opening Airtricity League match in Tallaght Stadium on February 18 behind closed doors as punishment for a firework incident at their game in Waterford at the end of last season.

It is understood the Hoops’ were charged by the FAI after a supporter let off a repeater firework during their November 5 clash at RSC that led to their final away game being momentarily halted in the opening half.

During the incident, two Rovers supporters were arrested by Gardai while they also received an indefinite ban from games in Tallaght Stadium from the club.

The Hoops, who are defending league champions, have two season pre-friendly games behind closed doors this weekend, have now been ordered to face UCD without supporters on February 18 as punishment for the firework incident.

At the time of the incident Shamrock Rovers said last November: “Shamrock Rovers F.C. unequivocally condemns the actions of two ‘so called’ supporters whose actions caused disruption at last night’s league game at the RSC in Waterford.

“The two individuals were arrested by Gardai at the scene and taken from the ground. The club will cooperate fully with the Gardai on any follow-up matters and will also be issuing indefinite bans from attending Tallaght Stadium to the people concerned.

“It is regrettable that the actions of two individuals caused reputational damage to the club and was not reflective of the atmosphere and support from the large away crowd of over 350 Hoops fans who supported the team throughout, enjoying a 3-1 away win.”