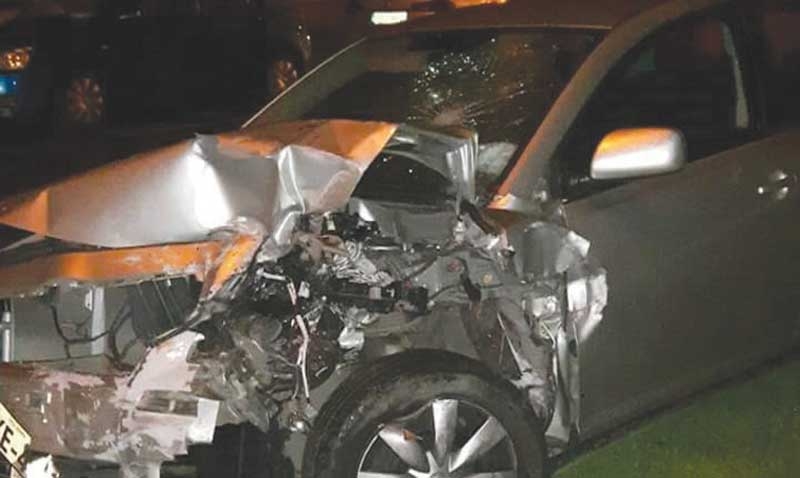 GARDAI are investigating after the driver of a vehicle involved in a head-on, two-car collision in Fettercairn fled the scene of the accident, leaving the other injured motorist to call his own ambulance.

At around 4.30pm last Saturday, November 18, a two-car collision on the Fettercairn Ring Road saw one man hospitalised, after the driver of the second car fled the scene after the crash.

Later that evening, after the abandoned car had been moved to the side of the road by emergency services, the vehicle was burned out.

The motorist who was hospitalised is a family member of Tallaght Sinn Fein councillor Cora McCann and speaking with The Echo she said: “When I saw the car and the damage done, I was shocked that he managed to get out with his life.

“This man was driving up the Fettercairn Ring Road when a car came head-on.

“It would appear that the other car was on the wrong side of the road and according to the driver who was hit, three young lads jumped out of the car and ran off [after the crash].

“They left the man injured on the road and he ended up having to ring an ambulance for himself.”

She added: “He was left very shaken but is ok and was treated for minor injuries in hospital.

“It would appear that these young lads were driving at high speed on the wrong side of the road… and after they left the scene, someone returned later and burned out the car.”

Ms McCann told The Echo that there is a serious issue around young people driving cars in the Tallaght area.

Confirming the collision to The Echo, a Garda spokesman said: “Gardaí are investigating a two car collision on the 18th November at approximately 4.20pm on Fettercairn Ring Road.

“A man in his 40s was brought to Tallaght Hospital with minor injuries.

“The driver of the second vehicle failed to remain at scene. Investigation ongoing.”

Anybody with information can call Tallaght Garda Station on 6666000.