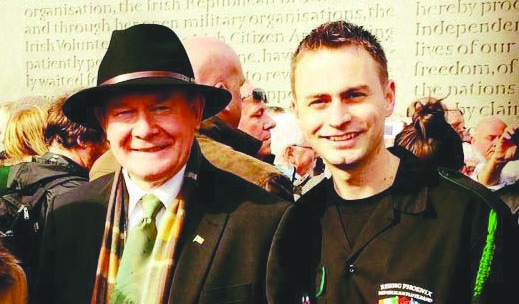 Members ratified the co-option of Mr Russell to Mr Fanning’s former seat at the start of the county council meeting on Monday evening.

Mr Fanning announced his resignation from his position in the chamber at SDCC with effect from October 1.

Councillors commended Mr Fanning for his work over the last 17 months.

Mayor Gogarty said he was a politician of “integrity and substance”. Cllr Ed O’Brien said the party “would not have wanted to lose Cllr Fanning”, and Cllr Timmons said the Independent Alliance would look forward to working with Cllr Russell.

“It is a difficult role to take on close to a local election, but Rob is well equipped to take that seat,” said Cllr Brendan Ferron.

Cllr Cathal King said: “He (Fanning) had many high visibility items on the agenda over the last 17 months. We have to remember he gave away one of his kidneys to one of his pals, that took away two months work. He’s a gentleman and will continue to work with the party.”

Outgoing Cllr Fanning said he thought he “might have become the next Charlie O’Connor and not another Colm Brophy”, and expressed hope that Ibrahim Halawa would be invited to speak in the chamber.

The newly co-opted Councillor Russell took his seat in the chamber, and expressed his thanks to the Mayor and his party for their support.

He said it was “a privilege to follow” in Mr Fanning’s footsteps, and took the opportunity to highlight recent events in Catalonia to “give their decision the respect it deserves.”