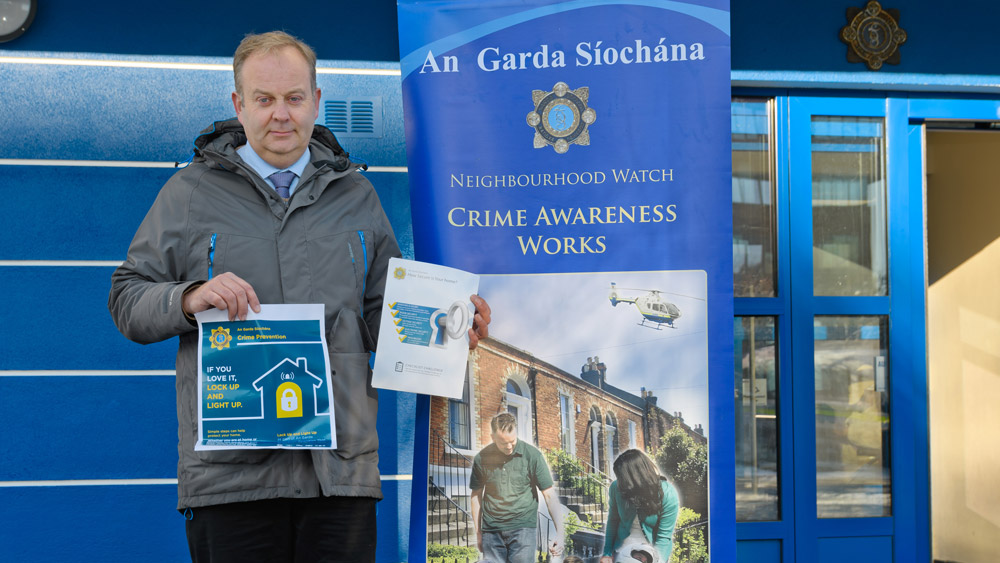 EVERY winter the number of burglaries increases as the darker evenings draw in, but there are a number of measures people can take to protect their homes and belongings from would-be thieves.

Crime prevention officer Sergeant Ciaran McLoughlin, who is based in Rathfarnham Garda Station, offered some advice and tips for Echo readers to deter burglars this festive season.

“People should lock up and light up,” said Sgt McLoughlin. “We’re advising people to light up their homes.

“Even though energy prices are high, we’re recommending that people use LED lights, because if you can give the illusion that your house is occupied it’s less likely to be burgled.

“Burglars mostly come in through open doors and windows, so people should always check that their windows and doors are locked.”

The number of burglaries typically rise at this time of year, for a variety of reasons, with Sgt McLoughlin adding that the majority occur between 5pm and 9pm.

“Criminals like to have a reduced risk of being caught,” he explained.

“So the darker evenings and the financial strain that everyone, including the burglars, is facing increases the number of burglaries.

“We’re recommending that people don’t keep large sums of cash in their home, but if they do, they should use a safe that’s bolted to the floor or a solid structure.

“Most burglars will spend 10 to 15 minutes at most in a house, so if you have something that takes longer to open, they won’t waste time with it.”

Sgt McLoughlin also said that houses with old plastic house alarms with beacons at the bottom are also being targeted as it’s often assumed that they no longer work, or they’re not as effective as newer models.

He advised people to invest in newer models of home security and to update their existing security system if it has been several years since they’ve done so.

“If you have an old-style alarm box on the front of your house, you should get it replaced, because burglars are targeting houses with them,” explained Sgt McLoughlin.

“The old alarms have magnetic strips that detect when a window’s been opened, but burglars can smash a window and it won’t alert – giving them free access and free rein in the house.”

If anyone sees anything suspicious, they should contact their local garda station.

For further information visit www.garda.ie or contact Sgt McLoughlin on 01 666 6564.

He is available to meet with residents, community groups and businesses in Tallaght, Rathfarnham, Terenure and Crumlin to advise them on crime prevention.

“Hopefully everyone will have a peaceful and safe Christmas and New Year, and if they take these small measures, it’ll reduce the risk of any unwanted visitors,” added Sgt McLoughlin.

NEWER POSTDrinkaware this Christmas: Give your body time for alcohol to leave system
OLDER POSTConcerns raised over preservation of original wall at Floraville Lodge