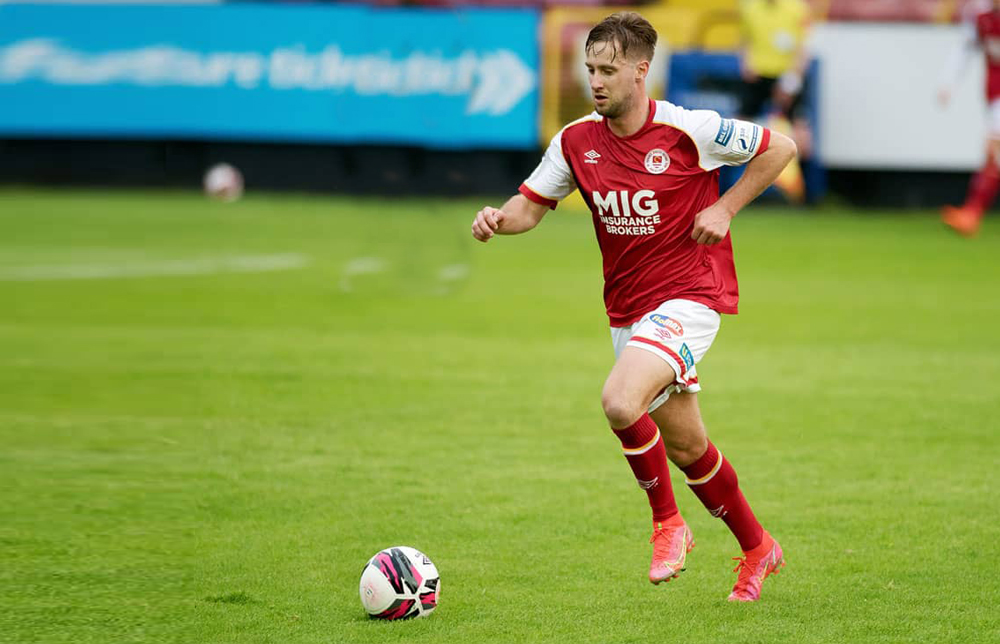 Billy King came close to grabbing an equaliser for Pat's

There was heartbreak for St Patrick’s Athletic at the Ryan McBride Brandywell Stadium this evening as Will Patching’s stoppage-time goal saw them losing out 2-1 to Derry City in the SSE Airtricity League Premier Division.

Falling behind to an earlier Patching goal, Pat’s rallied to level matters through Tom Grivosti’s 47th-minute strike. They looked set to return home with a respectable point, only for Ruaidhri Higgins’ hosts snatched a priceless win right at the death.

Coming into this game with three wins on the bounce – the most recent one being a 2-0 victory against UCD at Richmond Park on Monday – the Saints were in a confident mood ahead of their latest visit to the north. However, Derry were one of just two unbeaten top-flight teams in advance of this contest and enjoyed a dream start on their home patch.

Picking up possession at a left-hand angle in the fourth-minute, Patching delivered a superb strike into the far corner of the Pat’s net. This was an early set-back for Tim Clancy’s visitors, but Billy King was close to grabbing an equaliser moments later.

Candystripes custodian Brian Maher came to his side’s rescue on that occasion, before Joseph Anang did likewise at the opposite end when the fired-up Candystripes were looking to pounce.

King was marginally off-target just past the half-hour mark as the Saints continued to search for a way back into contention. Nevertheless, Derry held out to lead by a single goal at the break.

Yet whereas the home team hit the ground running in the opening period, it was the Inchicore side’s turn to do so two minutes after the resumption. A free-kick was worked out towards Grivosti and the Liverpool man curled into the top corner of the net from a distance of 25 yards.

With momentum now behind them, Pat’s were seeking to push on and edge themselves into the ascendancy. Chris Forrester drove over the crossbar on the hour mark, but Anang was called upon to deny Derry’s Daniel Lafferty 10 minutes later.

Both sides felt the three points were up for grabs and the increasingly-dangerous Grivosti tested the resolve of Maher from long-range. They seemed destined to settle for a share of the spoils, but Patching had the final say with another majestic effort on 93 minutes.

NEWER POSTRovers come from behind to draw with Sligo in Tallaght
OLDER POSTCannabis herb worth €110,000 and heroin worth €56,000 seized in Tallaght