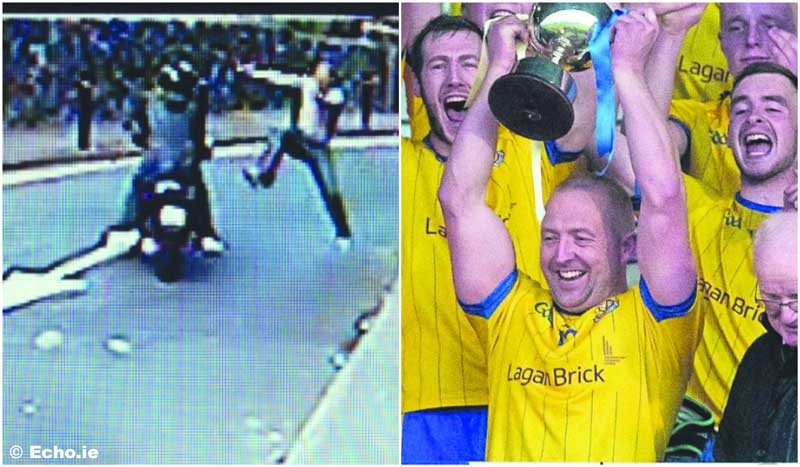 A CLONDALKIN detective is to be honoured for his bravery in foiling an armed robbery in Saggart whilst off duty.

Detective David Brennan was out for a drink with his father Dessie, a retired garda, in Jacob’s Bar in Saggart in July 2013, when a resident came in to report a robbery taking place in the Paddy Power bookmakers next door.

The pair rushed to the scene, and arrived just as two thugs, one wielding a gun, were about to escape on a motorbike.

David delivered a well-timed kung-fu kick to armed pillion passenger, sending him flying to the ground, whilst Dessie followed up with a shoulder charge, forcing the revolver from his hands.

They both grabbed the suspect and subdued him on the ground until gardai arrived to take him into custody.

“We just overpowered him, David was strong enough to pin him down, we knew he had a gun, we could see that,” said Dessie, a Rathcoole resident.

Responding to the threat was not an issue for Dessie, who spent 41 years in service at Kevin Street Station.

He continued: “It was instinctive. It’s the same as if you see someone putting a hand on an old lady.”

Detective Garda David Brennan will be presented with the Scott Medal at the Garda Training College in Templemore on Friday.

Dessie’s family, from Laois, are steeped in public service and sporting honours.

His brother Kieran was a previous recipient of the Garda Scott Medal, while another brother, Derek, a prison officer, received an award from the Irish Prison Service, after his bravery during a fire at Portlaoise Prison.

Father and son are members of St Joseph’s GAA club in Laois, while Dessie was involved with St Mary’s Saggart GAA for many years and is a well-known coach.

Still stationed in Clondalkin, David switched allegiance from his native Dublin to play for the family’s home GAA club.

He captained St Joseph’s to a Junior Club Championship title in O’Moore Park, Portlaoise in 2017.