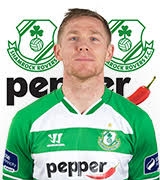 Shamrock Rovers have a massive task ahead of them next Thursday in Norway if they are to overcome Odd after they lost 2-0 tonight in Tallaght Stadium in their Europa League second round qualifier first-leg.

Conor Kenna returned to the Shamrock Rovers starting XI after an injury that saw him sit out both legs of the Hoops’ opening Europa League first round qualifier, while Ryan Brennan came in for Brandon Miele.

The youngsters omission left Mikey Drennan up front on his own, with Pat Fenlon choosing to pack his midfield, while Odd set up in a 4-3-3 formation.

It was the visitors who had a first sight of goal on 22 minutes when Ole Jorgen Halvorsen crossed for Olivier Occean, but Kenna did enough to deny him a headed effort.

Gary McCabe stung the hands of Sondre Rossbach four minutes later from distance, and it was the midfielder’s free kick straight off the training ground on the half hour mark that gave Rovers their first real sight of goal.

McCabe found Ryan Brennan loitering on the edge of the box, and his header, flicked on by Drennan to Kieran Marty Waters, resulted in the winger firing over from six yards.

The visitors probably finished the opening half stronger, and despite Drennan forcing Rossbach into a smart save low to his right at the beginning of the second half, Odd soon took the lead.

Fredrik Nordkvelle went down under a challenge from Kenna as he cut inside the centre-half in the penalty box, and Canadian international, Olivier Occean, converted from the spot.

Another Drennan effort, this time from distance, had the home crowd on their feet after an hour when the ball slipped through Rossbach’s hands, but the goalkeeper recovered to save on the line

Odd had played with plenty of purpose before their opening goal, and a period of sustained pressure and several corner kicks finally led to their second when Olivier rose high to head Akabueze’s cross in under the bar.

Drennan again threatened with a header after that, and Brandon Miele’s low delivery went all the way through the box and just wide as the Hoops sought to cut the deficit, but in the end they could not force a breakthrough.

NEWER POSTEnvisioning the future growth of South Dublin County
OLDER POSTDrugs seized from cars had a street value of over €250,000