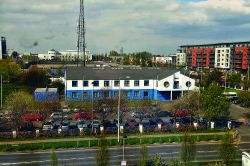 TALLAGHT Gardaí made two significant drug seizures last Friday worth an estimated street value of €250,000 – separate drug hauls which were made

within one hour of each other.
The first seizure happened around 8pm when gardaí stopped a car in the Kiltipper area and found it contained around €100,000 of cocaine and cannabis resin.

Three men, all with addresses in South Dublin area, were arrested during the search, but have since been released, pending the results of a toxicology report and a file to the Director of Public Prosecutions (DPP).
An hour later, at 9pm, a different team of Gardaí stopped a second car in Citywest which, driven by a Polish national, contained a stash of heroin with an estimated street value of between €120,000 and €150,000.
The man in the car has appeared before Tallaght and remains in custody.
A chief Garda source told The Echo: “These were two significant seizures that happened within a very short period of time.
“We are always working away in the background and following leads in relation to drug activity.
“Sometimes these leads lead to nothing, but sometimes, like Friday, we get a significant result.
“The two seizures on Friday are not connected and were the work of two different groups of officers – and very intelligence-led.”
The source added: “We are making small seizures all of the time, that’s a constant and gardaí are out there in communities daily following up leads.”