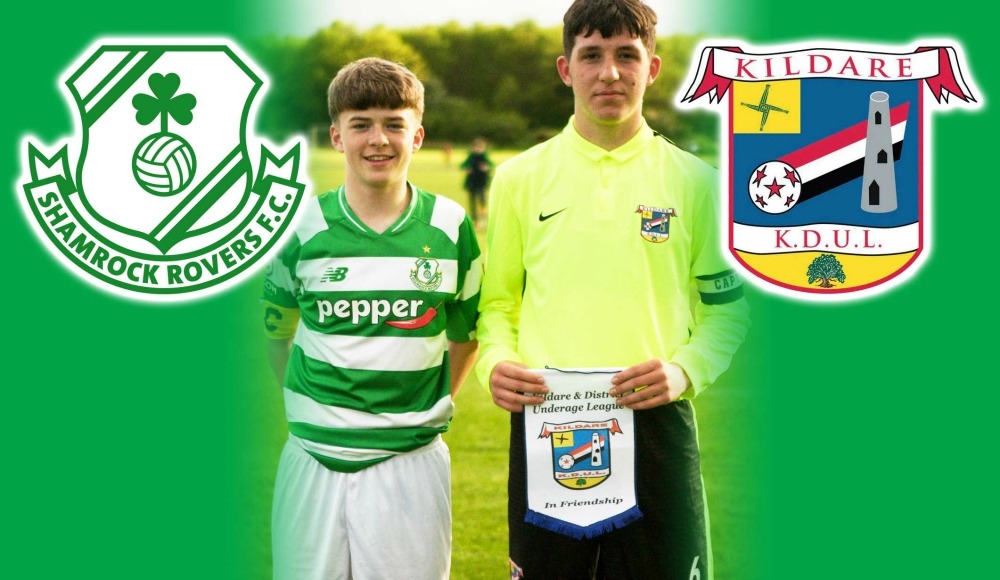 Shamrock Rovers and the Kildare District Underage League (KDUL) have entered a partnership which will see both parties working together to give children from Kildare a pathway to professional football in this country.

The partnership follows on from April’s announcement in relation to Shamrock Rovers linking up with Corduff FC as the club implements its stated commitment of giving players every opportunity to fulfil their true potential.

Speaking on behalf of Shamrock Rovers, Shane Robinson (Academy Director) said: “At present we have a high number of players playing for Rovers who live in Kildare.

“This link up is a vital cog in our Academy plans and with the opening of our new training grounds location on the Naas Road this move makes sense for many reasons.

“Over the last six months we have played the KDUL Academy teams from U12 – U15 both home and away.

“It is obvious that the KDUL has some talented players within its system. It is our intention to work with them to give these kids a platform to showcase and improve their skills even further”.

Secretary of the Kildare and District Underage League, Pat Mc Nally, said “We are delighted to be associated with Shamrock Rovers the biggest club in the country.

“We have been working together since Christmas with teams playing one another. It has been a major step for us.

“We are delighted to see players from Kildare move on to Rovers and only last week Andrew Spain who played for Moone Celtic and was in the Kildare Kennedy Cup squad two years ago play for the Irish Under 16 team in the recent tournament in Castlebar.

“Shamrock Rovers have treated the League with respect in all our dealings and it is hoped to expand our relationship to training, fitness and health.

“This is a major decision for the Kildare and District Underage League and we look forward to players from Kildare playing alongside current member Gary Shaw a former player within the League.”

NEWER POSTGarda said he was called a “woman beater” and a “uniformed scumbag” during Jobstown protest
OLDER POSTLocal pubs, hotels and restaurants provide more than 14,000 jobs and €300m in wages