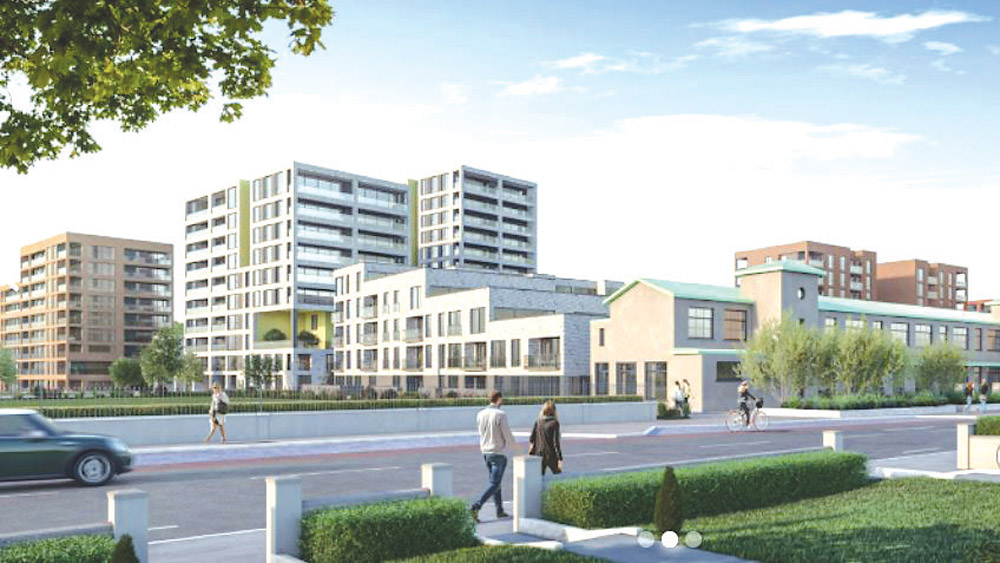 An artist impression of the De La Salle development

Shock at plans for 927 residential units at De La Salle

THE sheer scale of a proposed development for 927 residential units, in blocks up to a height of 13 storeys, at the former De La Salle National School in Ballyfermot, was a shock for residents to discover this week.

On April 13, Dwyer Nolan Developments Ltd made a submission to An Bord Pleanála for a strategic housing development (SHD) on the 8.3 hectares site.

Residents are worried that Ballyfermot already suffers from a lack of school places, with the amalgamation of three secondary schools, and the loss of De La Salle.

Also, other major plans for housing in the area, including 750 apartments in Park West, and over 170 ‘affordable’ homes at the back of Wheatfield Prison, could mean collectively, over 3,000 new residents, and a major impact on local resources and infrastructure.

Dwyer Nolan’s SHD for the grounds at De La Salle contains proposals for 325 one-bed, 538 two-bed, and 64 three-bed units, along with the demolition of the east and west wings of the former national school.

The school and surrounding GAA playing pitches were sold in 2018 by the De La Salle brothers to Dwyer Nolan Developments Ltd.

A public meeting was organised on Tuesday night at the Ballyfermot Resource Centre by Cllr Daithí Doolan (SF), in an attempt to answer questions within the community.

“We are losing a school at a time when we are amalgamating and closing schools already,” he said. 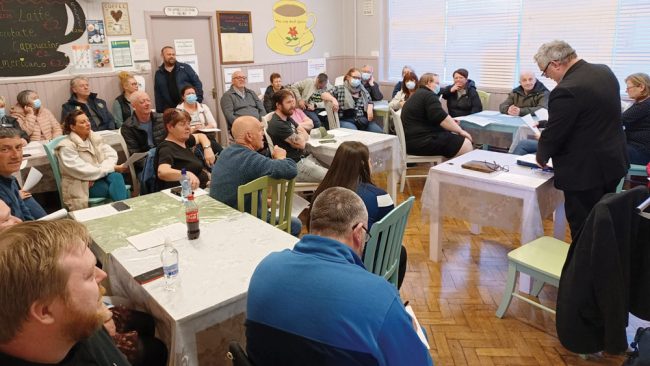 Residents at the meeting on Tuesday night with Aengus O’Shodaigh, TD addressing the gathering

“Only 10 per cent of this is social housing, which in no way contributes to a sustainable community, nor benefits the community, and brings added pressure on infrastructure in the area.

“At the meeting, we want to help people submit submissions, because this is under a SHD. The feedback we have been getting is that people are really angry about the sheer enormity of the development,” said Cllr Doolan.

Cllr Hazel De Nortúin, said reps previously had a local planner out to assess the area, who determined the proposals for over 900 units at the site would be akin to “installing a small village” into the area.

She said “questions still have to be asked” about the plans, including if the developer will follow through on proposals for retail units, if said units are what the area needs, and the use of playing pitches at the back of the site.

“There was a deal with De La Salle GAA, with 25 per cent of the site going to public space, but some of that land is included in the public space for the plan,” she said.

Cllr De Nortúin runs a naíonra in Ballyfermot, which has an “inundated waiting list”, and says the loss of recent pre-schools in the area, only exacerbates a bad situation.

“Two pre-schools, at St Michael’s and in Chapelizod, are closing. Since we had a planner out, schools are closing and more houses have been built.

“Cherry Orchard lost out on URDF funding to the city centre (last year). This is the fourth time funding was pulled for funding in Cherry Orchard. All is not lost yet, but we are close to the edge.”