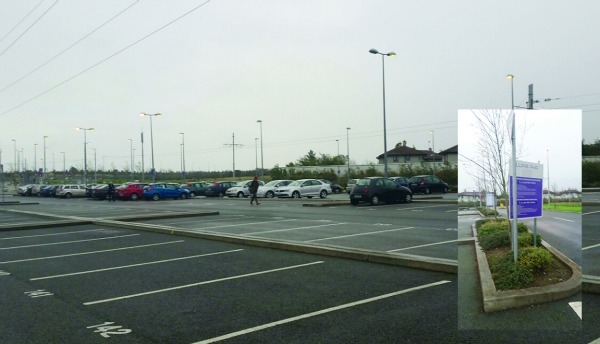 A DISGRUNTLED driver is reminding shoppers using the Luas to be aware of charges surrounding pay-and-ride car parks in the county after she found her car clamped in the “badly signposted” Cheeverstown Park and Ride.

The local woman had parked in the Cheeverstown Park and Ride earlier this month, believing parking to be free, before heading into the city centre on the Luas to begin her Christmas shopping.

Upon returning to her car she found that it had been clamped, along with several other cars within the car park, for having failed to pay the tariff to park.

She told The Echo: “This may not help me but may help other eager Christmas shoppers using the Luas park and ride car parks. It is very badly signposted so a lot of people would be unaware on entry that they need to pay.

“On entering the car park on a wintery, rainy day there was no obvious signage. There is a large sign that is lit up at the top and then large empty spaces below and then at the bottom tiny thin text detailing tariffs which I only saw after investigating after getting clamped.

“Further down there is indeed a detailed sign about paying for parking but we didn’t even pass this sign as we turned left entering the car park.

“Then every second sign post has a sign which states ‘Clamping in operation. Car park for Luas Customers Only’ – this led us to think that we can use the car park if using the Luas.

“Of course if I had known I would have paid, after all it was only one euro for four hours but I didn’t get any impression on entry that you had to pay to park there.

“There was at least one other car clamped there, maybe more. The weather was too bad to check all the cars.

“This is an absolute disgrace and I feel very hard done by. I always pay for my parking when requested. I would never chance it.

“I believe that the car park signage is not fairly or clearly marked to advise that its a pay to park.”

The woman unsuccess-fully appealed the clamping of her car with NCPS, the management company of the car park.

The Echo contacted the NCPS for comment about the signage in the car park, but a response was not received in time for print.