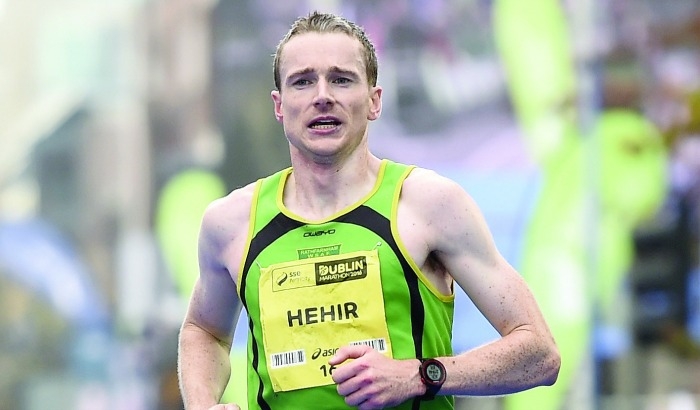 Attracting record numbers this year, the SSE Airtricity Dublin Marathon saw the two runners locked in battle right up until the feeding station at the 20km mark where Ciobanu managed to open up a gap.

And despite a strong rally by Hehir, Ciobanu picked up his fourth national title in Dublin in a time of 2:17:40 with Hehir finishing runner-up in 2:18:46 and Raheny’s Mark Kirwan taking bronze.

“Hand on my heart I can’t complain,” Hehir told The Echo. “We [Hehir and Ciobanu] were together up to about the 20km point, but he upped the pace and I just wasn’t comfortable.

“He got ahead of me by about 30 to 35 seconds and I managed to pull it back to about 20 seconds by around UCD, but he pulled away again and had a strong home stretch. He was a worthy champion.

“Obviously I’m a little disappointed, but all of my marathons have been under the 2.20 mark and that shows I’m consistent and strong.

“If I can just build on this performance then the big one could be just around the corner,” he added.

Delighted with his victory Ciobanu said “I kept the same pace. Gradually I opened the lead, but Sean finished hard and fast. He wasn’t far behind me.

“I’m relieved. I really wanted to win the national title. That’s my best Dublin marathon by two minutes,” he added.

Hehir, who had won the Dublin Half Marathon the month before, helped Rathfarnham to silver in the Men’s Team division in the National Marathon after Paul Stephenson and Paul Moran also turned in strong performances.

The 2016 runner-up is not likely to be contesting the Dublin Cross Country Championships for Rathfarnham, but hopes to be back representing his club in the provincials and possibly the All-Irelands.

“Rathfarnham have a great squad of lads and if I can help them get to the All-Ireland podium it would be great,” said Hehir.

Meanwhile in the women’s section of the National Marathon Donore Harriers’ Grace Kennedy finished up 11th with DSD’s Romaine King and Amy Moran home in 21st and 22nd respectively.

Kennedy’s performance, along with that of Anne Curley and Sinead Graham, helped Donore to second place in the Women’s Team event behind Galway City Harriers.