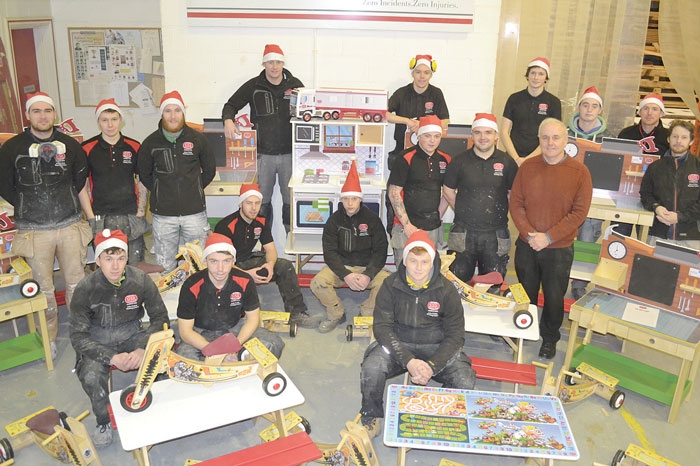 CONSTRUCTION giant John Sisk & Son is synonymous with many well-known buildings and structures in Ireland, so much so, that nearly everyone in the country has come across its work – whether they knew it or not.

From Croke Park, to the Aviva Stadium, Dundrum Town Centre, Tuam by-pass, or the Bord Gais Theatre, the company has played a major role in developing the landscape of Ireland.

However, for the past 40 years, the Clondalkin firm has also been building hundreds of wooden toys for children in need each Christmas.

The toys are built from scratch by Sisk’s first-year apprentices, who work on nothing else for more than a month.

During November, the Sisk workshop near the Red Cow roundabout is converted into Santa’s workshop as apprentice carpenters get the toys ready for children in time for Christmas.

“It has grown and grown over the years,” said Dave Tracey, Joinery Works and Training Centre Manager at Sisk.

“I’m with the company 35 years. At the start the quantity was so small, but this year we’ve made over 500 pieces. It is great payback seeing young fellas learning their trade and starting out making toys.

“They appreciate doing something for someone else, and are learning the skills of their trade at the same time.”

The toys are built to a high standard and transported personally by the Sisk team to children’s hospitals and charities around the country and abroad, essentially wherever Sisk has a presence/site.

With a turnover this year of over €1.1 billion, business is profitable at Sisk, but it is also an appealing career path for youngsters, through its famed apprenticeship programme.

Dave continued: “This is a job route. Year on year we do interviews in September, and take on apprentices in October/November.

“We know we have skilled managers, but it is unique and we are very proud of it. If you invest in people, it is a good business model. Some of our graduates go to Australia or Canada and come back to us. If they left on good terms and are good lads, we leave the doors open. We’re over 150 years in business and invest a lot in training and apprenticeships.”

Mr Tracey cites the difference in apprenticeship routes with European countries with Germany (80 per cent of people go through the apprenticeship route), compared to Ireland (only 2 per cent), but welcomes the recent addition of 26 new trades (just two in construction) to the existing 26 already in place in the country.

“There is a reliance by the Irish government on foreign investment, we need to look closer to home.”

Sisk employ approximately 1,300-1,500 employees, not including sub-contractors, and spent €850 million on their supply chain (materials, wages etc) in the latest year’s accounts.