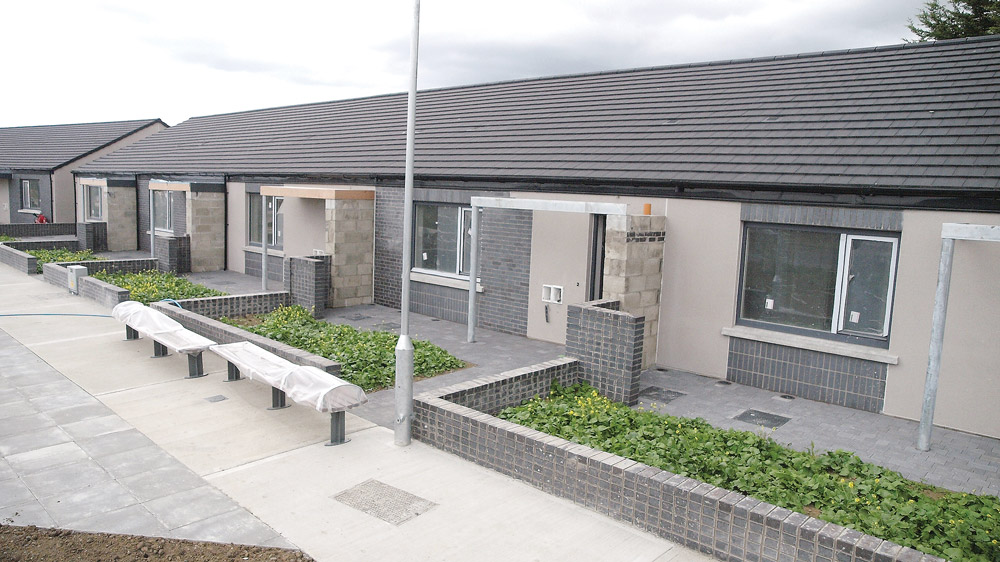 One of the schemes in Maplewood

THERE are 490 social houses at different stages of development by South Dublin County Council.

At the July monthly meeting of the council, the housing department gave a breakdown of the status on 17 approved and proposed housing projects across South Dublin County.

Construction of older persons housing schemes at Fernwood and Maplewood, totalling 40 units, is due for completion by August/September according to approved housing body Clúid.

Allocation of the homes at Fernwood and Maplewood is currently in process.

Twelve houses at St Catherine’s Way in Knockmore are due for practical completion in October with phase one of 25 homes at Riversdale in Clondalkin due by September.

Options for the development of phase two at Riversdale, which will bring the total number of units up to 43, are “currently being explored”.

The largest of the council’s social housing projects is at Whitestown Way, with 81 units due for practical completion at the beginning of 2023 as well as 10 units in Templeogue Village.

Works on 69 units in Balgaddy are anticipated to start by September, with tender assessment and contractor appointment being progressed while Dublin SIMON will re-tender a 10-unit project at the Older Nangor Road.

Forty-one units at St Mark’s Avenue are due for completion by the end of this year while the 12-units at Brady’s Field in Old Bawn is due to start this month.

Site works at the Eircom Site/Nangor Road kicked off last March with the current project completion date at the end in quarter four in 2023.

Four units at Lucan Road, Palmerstown, 19 at Grand Canal Lindisfarne, 31 at St Aongus’ Green, St Ronans Crescent and Pearse Brothers Park and nine at Rossfield all have yet to break ground.

Developments at Deansrath/Melrose, Apline Heights, Castlefield and Oldcastle Park are currently at the proposal stage.

Delivery of 16 houses at Watercourse Grove, Homeville is expected to be delayed until 2023 due to contractor delays and associated issues.

As previously reported in The Echo, 14 housing schemes are currently “on-site and in flight”, with the council tracking at around 390 units – 10 units

shy of their 2022 Housing For All target.

“The difference being the fact that with Homeville, that contract had had to be determined, so that leaves us with a little bit of a shortfall,” CEO of the council, Daniel McLoughlin said.

“Colm [Ward, Director of Housing in SDCC] and our team are working very much to have that project re-contracted and back on site by the end of the year.”

Mr McLoughlin said that the council “are also looking to make up the shortfall to bring us on-line for the 400 target.”

NEWER POSTCelebrating the past looking to the future
OLDER POSTCheck out this week’s Echo jobs – August 11th, 2022