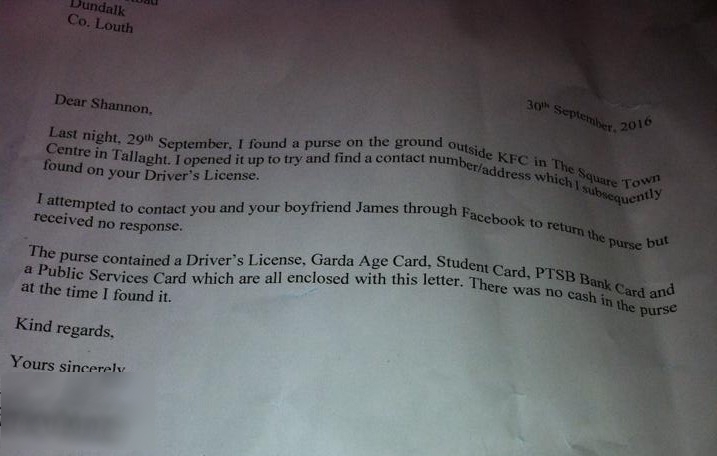 In a week when the honesty of a Tallaght woman was praised after she helped reunite a nurse with her lost rent money, another heart-warming story has come to light that once again proves Tallaght people are some of the soundest in the world.

Running late due to work, Shannon quickly made her way through the Square and to the stadium where she discovered her purse missing.

The Dundalk supporter retraced her steps, but the purse was no where to be found, and so she thought it was gone forever until she received a lovely present in the post on Monday morning, as she explained.

“I only realised as I was getting near the stadium that I had lost my purse, I went back and it was nowhere to be found.

“The man who found it then tried to add me on Facebook and I declined as I didn’t know him, but the next day I saw the message he sent me and then my purse and his letter arrived on Monday morning.

“He is an absolute gentleman so he is. I’m delighted I have it now. I don’t have his address and if I did I’d love to send him a thank you card and something in return.

“I’m eternally grateful, he saved me so much hassle and there aren’t many people like him around anymore.”

In the letter the Tallaght native stated where he had found the purse, what was in it, and how he had attempted to contact Shannon and her boyfriend through Facebook.

Having had no reply, he decided to go one step further than most would and popped it in the post, which is a pretty amazing thing to do.