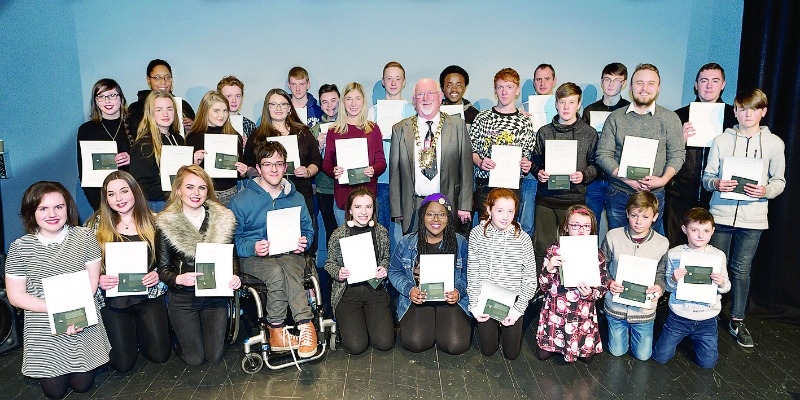 A SPECIAL presentation evening was staged in Rua Red recently to acknowledge and celebrate the artistic achievements of 40 young people who performed in a special 1916 commemoration.

Aged between seven and 23, the young people took part in a unique performance which “explored the radical and dynamic education experiment” at St Enda’s School in Rathfarnham.

Run by Patrick Pearse, the school’s curriculum included the staging of plays and pageants, which explored and celebrated Ireland’s mythology, particularly Cúchulainn and Fionn MacCumhaill and the Fianna.

The young people, led by Tallaght Community Arts (TCA), reimagined St Enda’s Open Day in 1914 and created a production called Aeridheacht – Taking the Air, which was Pearse’s title for the annual open day.

The production was staged at the Pearse Museum for five nights in July, during which President Micheal D Higgins and Ms Higgins attended during their ceremonial state visit to the Rathfarnham-based museum.

Last week, a special event was held in Rua Red to mark the significant contribution made by the young people, who were awarded special presentations by County Mayor Guss O’ Connell.

Photos and a video diary of the year-long project was also shown.

According to Tony Fegan, TCA co-ordinator: “The young people from diverse cultural and linguistic backgrounds included individuals with a strong grasp of the Irish language that informed the final bilingual performances.

“Between June of 2015 and July 2016 the young people worked with an international and Irish artist team, researched how the school worked and what role the ‘open days’ and ‘pageants’ had played in the life of the pupils.

“The cast worked during school holidays and weekends, developing the performance that led up to the six site specific performances between 5 and 10 July 2016.”

Tallaght Community Arts creates opportunities for artists and the people of South Dublin County to explore together the “transformative and celebratory power” of the arts for the wellbeing of all.