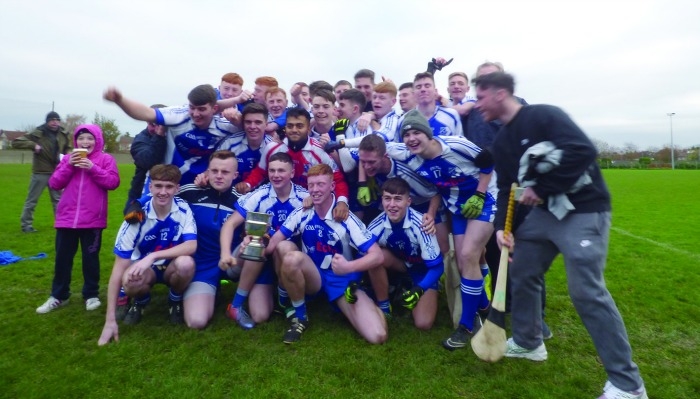 ST ANNE’S minor footballers secured the ‘D’ Championship crown after they overcame the challenge of O’Dwyer’s 2-8 to 0-12 in O’Toole Park on Sunday afternoon.

The contest began with O’Dwyer’s quickest out of the blocks as they tagged on some good scores to settle their side.

That was until the 15 minute mark when St Anne’s Grant Perry found an opening and dispatched a low shot to the bottom corner of the net to give the Bohernabreena men a much needed-boost.

On 20 minutes, a long range St Anne’s free from the boot of Gordon Robinson caused confusion in the O’Dwyer’s full back line which resulted in the ball being deflected into the net.

These two goals proved the difference at the interval as both defences held firm throughout.

Like the first half, the Balbriggan outfit began the second half the stronger and began eating into Anne’s lead.

With great performances from the likes of James Cannon, Luke Reddy and Gearóid Lynch in the back line and an outstanding display from team captain Sean DeLappe in midfield, St Anne’s stood strong to hold out the talented Balbriggan forward line.

With 20 minutes remaining their task became tougher when Dylan Heffernan was unlucky to be given a second yellow.

However this very young promising St Anne’s team, of whom only four of the squad will be overage for minor next season, held out to bring the championship cup home to Bohernabreena.