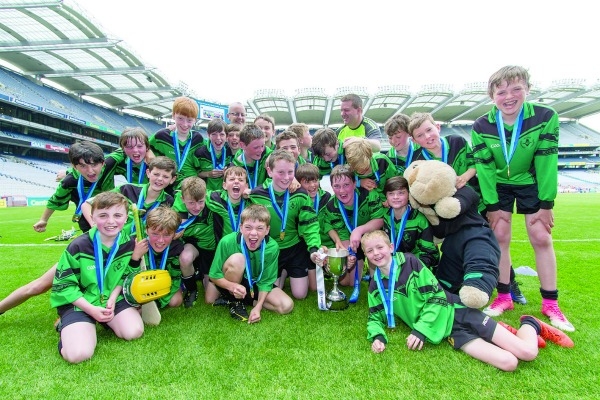 ST JOSEPH’S Terenure got the better of neighbours Ballyroan BNS, winning out 2-8 to 2-2 in an exciting Sciath Marino decider in Croke Park on Tuesday.

Joey’s raced out of the traps quickly with two first half goals from Charlie Quinn and Aaron Avery.

Four points were added to this tally thanks to some fine free taking by centre back Donal Murray and Daniel Martin which helped propel them into a commanding 2-4 to 0-1 lead by the break.

The hard-working Cathal O’Sullivan accounted for Ballyroan’s only score of the first half, but they were not about to throw in the towel and came powering back after the recess.

Indeed, led by impressive centre back and captain Seán Wall, they set about closing the gap with Scott McAllister pulling off some remarkable saves to keep them in contention.

An excellent pointed free from Mark Keogh followed by opportunist goals from John Keane and Fionn Callan gave the Ballyroan boys a glimmer of hope as the game entered its closing stages.

Yet points from Murray, Martin, and arguably the score of the game from Aaron Suttle was enough to steady the ship for St Joseph’s.

With the majority of the St Joseph’s team coming from fifth class, and a further two on the panel Paul O Connor and Thomas Curran in fourth, the future of hurling in the school certainly looks bright.

Likewise 17 of the 24 boys who togged out for Ballyroan are available for selection next year.