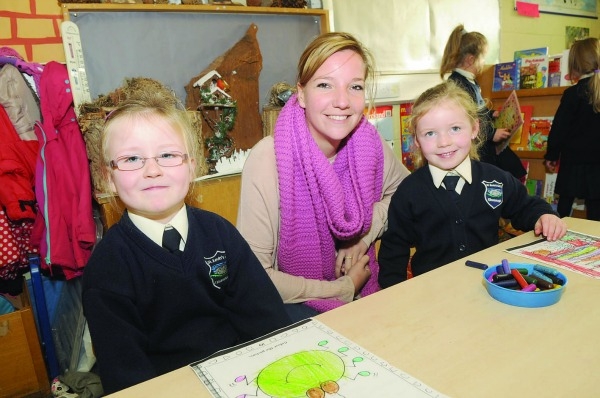 PUPILS from St Kevin’s GNS in Kilnamanagh learned about the Dutch Christmas tradition Sinterklaas last week as they were visited by two student teachers from the Netherlands.

The visit by Carina and Esmee was organised by teacher Ann Dorrepaal, who worked with Carina’s mother 30 years ago in an International school in The Netherlands.

Speaking to The Echo during the visit, Ann said: “The visit has been going great, there’s definitely a big difference for them in Ireland compared to The Netherlands.

“There are very few all-girls schools in The Netherlands, no uniforms and their classrooms are very different – the younger classes, similar to Junior and Senior Infants, don’t have assigned seats in their classrooms, they move around the room and sit at different tables during the day.

“They have been going around the classes and the children have been very interested in learning about Dutch Christmas traditions such as Sinterklaas which takes place on December 6.

“As part of the girls’ final year of training as teachers they had to complete a placement in Europe and they got in touch to see if it would be possible to come to Kilnamanagh.

“It would definitely be something I’d enjoy organising again, it’s been going great.”

Pupils from third and fourth class were also treated to a visit from Cricket Ireland as part of a six-week set of visits to the school to help promote the growing sport.