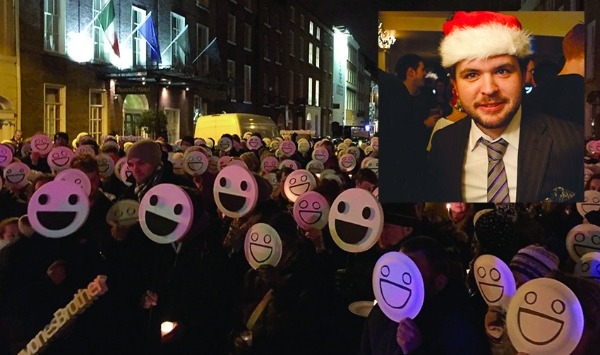 A SILENT vigil in memory of Caoilte Ó Broin, from Lucan, and to highlight problems in the mental health service was held recently outside Government buildings.

The Anyone’s Brother vigil was attended by hundreds of people, with attendees wearing smiling masks that were distributed to the crowd for a minute’s silence that was held during the vigil.

Caoilte’s body was tragically recovered from the river Liffey on January 2 following years of mental health problems and a public call for help from his sister through Joe.ie.

Shane Gillen, the fiancé of Caoilte’s sister Cat, spoke to the 400-strong crowd at the vigil.

He said: “Tonight, we gather in memory of Caoilte. Our fight for answers is no longer singular, and our journey is no longer to be made on our own.

“We stand in solidarity with the mothers and fathers of the broken, the brothers and sisters of the fractured and the friends and families of the lost.

“We stand in solidarity with those who hold hope, with those who are engaging with the mental health system, and with those who believe that a change must be made in order to better the minds of Ireland’s sons and daughters.”

Since Caoilte’s tragic passing, there has been strong public support for the O Broin family, including musician Niall “Bressie” Breslin who helped the family before Caoilte’s passing and delivered a speech on mental health to an Oireachtas Joint Committee earlier this year.

“No family should suffer as Caoilte’s family did, and no future generation need suffer in the shadow of this generation’s inability to affect real and tangible change.

“Caoilte was anyone’s brother, and we hope that his death can pave the way for a better system.”
Caoilte’s family has been invited to speak on The Late Late Show tomorrow (Friday) about his story.

Further information and support on Dual Diagnosis and mental health and addiction can be found online at www.dualdiagnosis.ie