Ballyfermot’sJessie Stapleton of Shelbourne with her SSE Airtricity Young Player of the Year award (Photo: Sportsfile)

THERE was delight for a number of local women’s soccer players at the Airtricity league awards last week.

Ballyfermot girl Jessie Stapleton was named the Young Player of the Year following a superb season which saw her score a goal for her club Shelbourne in the FAI Cup final against Athlone.

Stapleton has been in flying form this year and was recently called up to the Senior Women’s International squad.

Tara O’Hanlon from Peamount United won the EA Sports Under 19 Player of the Year Award following a successful season winning the cup with the Newcastle side. 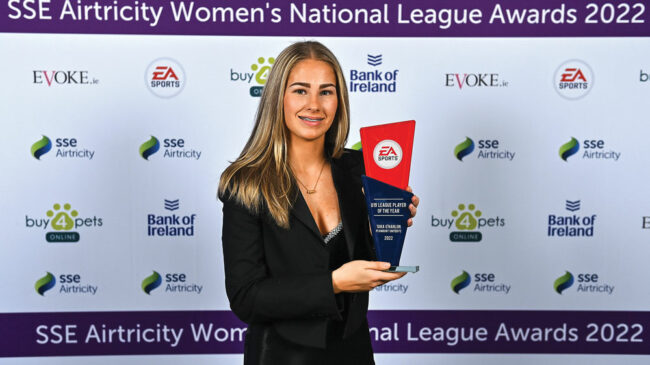 The Golden Boot for top goal scorer went to Peamount United captain Áine O’Gorman for the fifth time in her career. O’Gorman has since left Peamount to join Shamrock Rovers.

O’Gorman was also named on the Team of the Year.