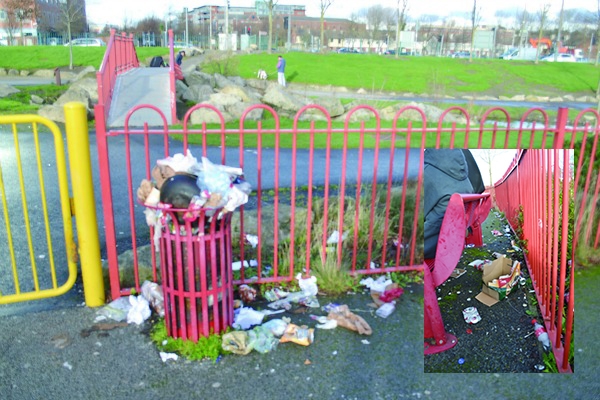 PARENTS were left “shocked” over the condition of the playground in Sean Walsh Park following the Christmas period, after the play space was turned into a drinking den.

The popular state-of-the-art park was left littered with bottles, broken glass and food wrappers after the play space was used as a hang-out over the holiday season, with some of the playground equipment also damaged.

One grandmother who visited the park on Monday told The Echo: “I actually couldn’t believe the state of the playground, it was horrendous.

“I had brought my granddaughter down to the playground but we had to turn around and go home.

“The condition of the playground was a disgrace, I was actually in shock at how bad it was and quite annoyed that South Dublin County Council is not maintaining and protecting local facilities like this.

“I appreciate that staffing levels are lower over the Christmas period but this is a great playground used by lots of local families and if the council is going to invest in facilities, they need to be able to maintain them – and patrol them.”

She said: “We have CCTV cameras on the playground and now also on the pedestrian overbridge to the square.

“They are monitored but it has been difficult to get a successful prosecution against an individual for anti-social behaviour or damage to equipment with CCTV alone as a full clear screen shot of a person’s face is required to get formal identification.”

Ms Walsh also confirmed that Sean Walsh Park is inspected on a daily basis and the bins emptied every Monday, Wednesday and Friday.

Following a recent inspection of the playground, the council has proposed to undertake maintenance works in the playground including replacing and repairing any damaged play equipment, replacing open top litter bins, cutting back the overgrowth around the boundary, removal of the damaged timber fence, repair of the self-closing gates and power washing the entire playground surface.

After receiving a number of complaints from the residents, Tallaght councillor Charlie O’Connor has welcomed the council action.

“It is important that the public would feel comfortable and safe in our parks and I will continue to pay particular attention to issues relating to Sean Walsh Park”.