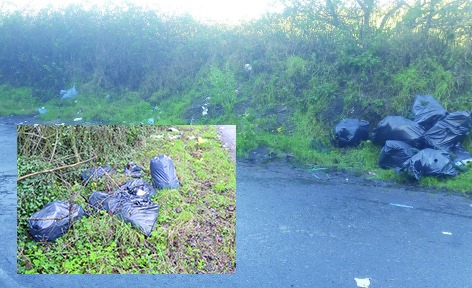 SOUTH Dublin County Council has received 24 reports of illegal dumping since Christmas Day, with litter wardens currently trawling through rubbish in a bid to identify the culprits.

Right across South Dublin County, household waste and Christmas packaging has been spotted dumped on green spaces, in local beauty spots and on backroads – with residents reporting incidents to the local authority and their public representatives.

The council told The Echo that to date, 24 complaints have been received in the past two weeks concerning illegal dumping across the county – with five complaints received for Clondalkin, five for Lucan, two for Rathfarnham, three for Tallaght Central, five for Tallaght South and three for the Templeogue/Terenure ward.

Mary Maguire, Senior Executive Office with the council’s Environment, Water and Climate Change unit, said: “All these incidents have been referred to our Litter Warden Service for investigation under the Litter Pollution Act 1997.

“Where appropriate, our Litter Warden Service will, in the first instance, inspect the dumped material in an effort to ascertain the perpetrators so that appropriate enforcement action can be taken.

“Following such inspection arrangements are made by our Public Realm Service for the removal of the material in question.”

She added: “While one of these reported incidents related to dumping at the council’s Recycling/Bring Centres, we are nonetheless aware that some bring bank areas were in an undesirable state for reasons outside of our control, namely reduced staffing levels over the holiday closure period and their focused attention to duties associated with the adverse weather conditions over that time.”

In October, the council introduced the Litter Management Plan 2015 – 2019, which provides for enhanced monitoring and pilot surveillance options at various locations across the county.

It is hoped that enhanced monitoring will increase enforcement action alongside making improvements in the aesthetic appearance of South Dublin County.

An additional €200,000 was allocated in the 2016 budget to facilitate the implementation of the Litter Management Plan 2015 – 2019, which also includes the delivery of additional bins, audio messaging, anti-dog fouling measures and graffiti removal.

Reports of illegal dumping can be made by calling the council on 4149000, contacting a public representative or online through www.fixyourstreet.ie