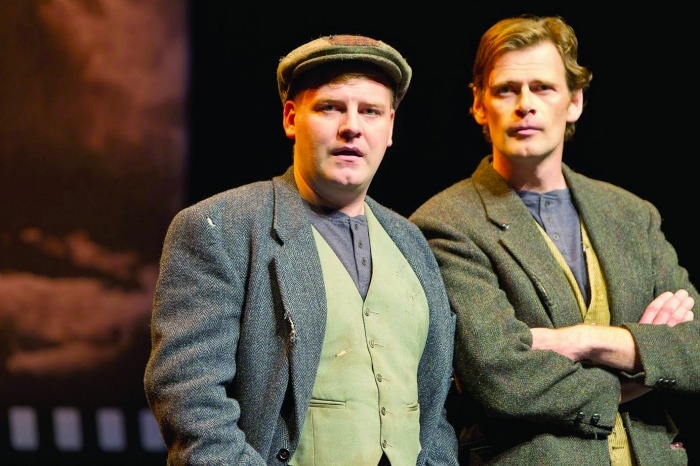 FROM playing gangsters and drug dealers, to a comedic interpretation of Roy Keane in the hit musical ‘I, Keano’, Tallaght actor Stephen Jones has a versatile repertoire of characters to his name.

Alongside treading the boards and being on screen, the Glenview native is also a skilled playwright who’s currently starring in his self-penned play ‘From Eden’, and also as Laser Byrne in ‘Red Rock’.

The former Tallaght Community School student took a few minutes out of his busy schedule to tell us about his acting and writing work so far.

What’s your best memory of growing up in Tallaght?

My best memories are playing football in my estate with my pals Barry McCarthy, David Mooney and Andrew Cousins. The latter two both went to England to play professionally.

During the summer, lads from other estates would come over to play against us. I can’t remember us ever losing but some of my friends from Castle Park might have something to say about that!

You initially worked part-time in a call centre while pursuing a career in acting, was there ever a point where you worried that it might not work out?

Yeah, I think every actor has their doubts as to whether they can make a living from acting.

You’re constantly looking for the next gig to keep you going and you have to accept that it will always be that way unless you become a very successful movie star.

On the other hand, I remember hearing some great advice which was “If you have a plan B then you won’t make it as an actor”.

I thought that was great and I try to keep that mentality. Acting and writing is my job and it’s my only plan. You have to remove the safety net at some point.

Also, I think that if you believe things have ‘worked out’ you’re probably not moving forward and trying to progress.

How has studying creative writing informed your work as a playwright?

Firstly, I don’t believe you can teach someone how to be a good writer. I did the MA in UCD and what I learned from that year was really some practical steps in what not to do.

I learned a good bit about structure, and how the editing process and rewriting is really where the hard work begins. I also got to meet with some of Ireland’s top playwrights and got some really useful advice from them.

In what way did you learn ‘what not to do’, was there very little overlap between what you studied in that course and what you actually do as a playwright?

The MA had writers of different mediums so we looked at everything: novels, poetry, short story, playwrighting. It was a chance to try your hand at different disciplines of writing while working on a thesis.

My final project was two plays that I had written. I learned about structure in terms of playwrighting and was given access to chat to professional writers.

I also got feedback on my work but the practical side was up to the student. We weren’t there to learn how to write. It was really a development year.

You starred in ‘Love/Hate’, and you also had a role as a drug dealer in ‘Red Rock’ – what’s it like to play characters who are involved in criminality?

Well it was great to be involved in Love/Hate because it was such a phenomenon. I loved my time on it though and I learned a lot.

My character in Red Rock, Laser Byrne, is back on the show now and has a major storyline over the next few months and it gets really dark.

On one hand, it’s a lot of fun to play a bad guy because it’s very different to how I am in real life.

But it was only recently, when I was filming some scenes for the new season of Red Rock and my character was doing some horrible things, that it hit me that people like him exist in the real world.

We read about it in the papers all the time. It’s important to get it right and make it as real as possible. Although, it can be hard to shake off at the end of a long day filming.

You also played Keano in the comedy play ‘I, Keano’. Do you prefer doing acting in comedies or acting in crime dramas?

I think most actors are similar in that we like to mix things up. In an ideal world you would be constantly doing different roles and jumping between comedy and drama and between stage and screen.

I had a great time playing Keano. He is such an enigmatic figure and to be in front of big crowds at The Olympia and to be doing the impression and making people laugh was a real buzz.

Before that role I had just done two other big comedies (Alone it Stands and Stones in his Pockets) so by the time I,Keano was finished I was crying out for some serious parts.

And now a year later I’ve done lots of serious stuff so I’m dying for a comedic part again.

You wrote and starred in the play ‘From Eden’, what was the experience of writing a character that you knew you would be portraying like?

Well one of the many reasons I wrote the part of Alan in From Eden was because I had done so much comedy on big stages and I wanted to write a serious part, a quiet character for a show I knew would be playing in small intimate theatres.

It was a real challenge because when you write something for yourself you have to leave the writer hat down once rehearsals start.

You have to approach it as an actor would. I had to forget that I wrote the play in a way and discover the character from an acting point of view if that makes sense.

Thankfully I had a great co-star in Seána Kerslake and a fantastic director in Karl Shiels who both helped me a lot when I was struggling with it.

Terrifying and brilliant at the same time. In that particular piece, I think I play 43 different characters so it was kind of like having a whole cast around me.

That play was actually written for me to perform by writer Larry O’Loughlin who was a mentor of mine in the Tallaght Young Writers Group I had joined when I was a teenager.

You said in a previous interview that you believe people from Tallaght “are good storytellers”, why do you think that is?

I think Irish people are in general. I think Tallaght is full of real characters and I think it’s an attitude and a way of thinking that we have.

I just think we know how to spin a good yarn. I don’t know what it is. Some of Ireland’s top writers and storytellers at the moment are from Tallaght.

The likes of Mark O’Rowe and Emmet Kirwan spring to mind. Something in the water I suppose! (And that’s why we should never have to pay for it.)

Lastly, what projects are you planning to work on in 2017?

My play From Eden is back at Bewleys Café Theatre at Powerscourt Shopping Centre at Lunchtimes (1pm) Mon-Sat until January 28.

I am doing The 24 Hour Plays at The Abbey Theatre on January 29. I am then back doing Conor McPherson’s play This Lime Tree Bower in various theatres around the country.

Dublin dates are 7 and 8 March at The Pavilion Theatre in Dun Laoghaire. I will be working with Fishamble Theatre Company on a new play called Maz and Bricks by Eva O’Connor in The Project Arts Centre in April/May.

And I will be watching Red Rock on TV3 every week to see what my character Laser Byrne is up to and everybody else should too!