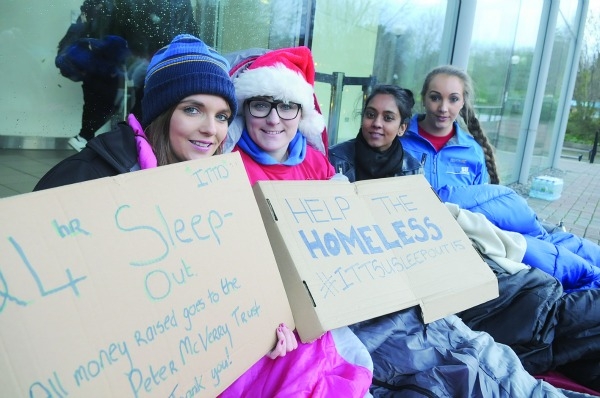 STUDENTS at IT Tallaght braved the elements this week by taking part in a 24-hour sleep-out to raise awareness and funds for those sleeping rough this Christmas.

The sleep-out is just one of a number of events organised as part of the college’s Social Justice Week which, now in its fifth year, encourages students to focus on their social development as well as their academic studies.

The week was officially launched on Monday, when ITT President Thomas Stone and Maria Finn, South Dublin County Council’s Social Inclusion Officer, spoke to students about the importance of social justice, especially in light of today’s students being social changers and influencers of the future.

Father Peter McVerry also dropped into the college to speak with students about homelessness and the housing crisis, stressing that the “human right” to housing is currently not being provided in Ireland.

On Tuesday, armed with sleeping bags, hats and gloves, students staged their sleep-out and on Thursday, they will hold an hour’s silence, Solidarity by Silence, to highlight how many people are forced into silence and do not have a voice.

A fair trade coffee morning, carol singing, Christmas market and a collection for VISIT, Tallaght’s community-led soup kitchen, and Cairdeas homeless action are also on the week’s schedule, alongside a visit from a doctor with Medecins Sans Frontieres Ireland, who are currently helping Syrian refugees.

Sr Bernadette Purcell, ITT Chaplain, told The Echo: “This is an ideal time of year to be holding our Social Justice Week as people are more tuned into homeless issues and the gift of giving.

“The week also creates a great feeling around the college in the run-up to Christmas, as in giving there is a great sense of joy.

“Alongside helping those in need, the week really benefits students and staff and introduces students to social justice, hopefully making volunteering and fundraising a life-long practice for them, not just a once-off event.

“Nurturing this side of a young person’s development is also an important aspect of learning.”
The Student Union has set up an online fundraising page on www. fundraising ireland.ie and donations can be made online at https://give.everydayhero.com/ie/itt-su#/