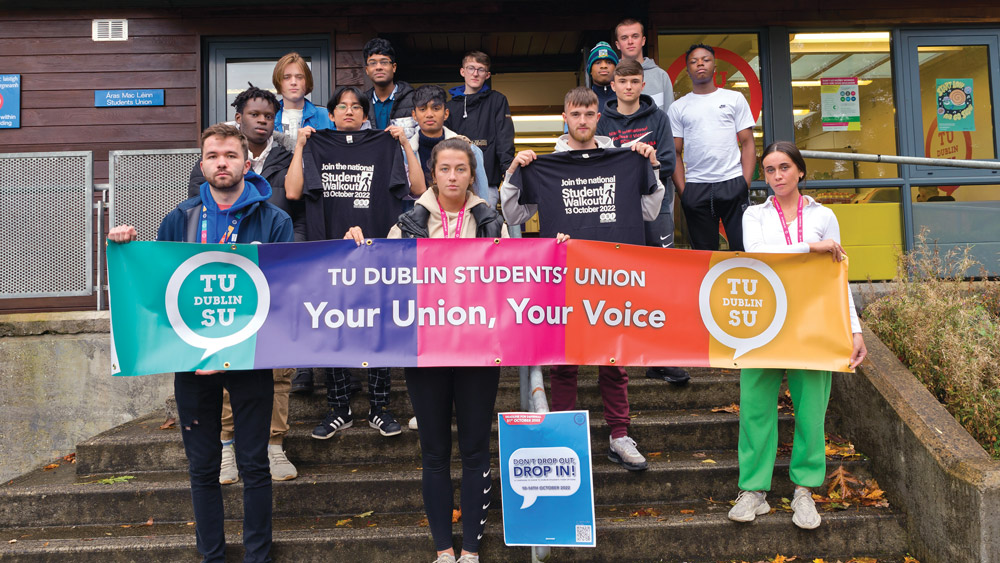 STUDENTS at TU Dublin – Tallaght will conduct a walkout on campus today, Thursday, October 13, in protest of the cost of living and housing crisis.

At exactly 11.11am the Union for Students in Ireland (USI) planned protest will take place with students taking a stand and walking out of classrooms.

Meeting at the Students’ Union building in TU Dublin – Tallaght, students are geared up to advocate for rent protections, abolishment of the student contribution charge, and a living wage of €13.10 an hour.

“This is to raise awareness to the Government for what’s going on, how students and how everyone is living in Ireland at the minute because it isn’t acceptable,” James Curry, Deputy President of TU Dublin Students’ Union, who is based on Tallaght campus, tells The Echo.

“I know Budget ’23 came out and it did give us some small things such as the €1,000 reduction in the student contribution charge – but that’s only for this year.

“Even with the changes to the SUSI grant, but the thing is, that won’t be implemented until next year.

“As much as we welcome the change, it’s still not enough and there’s more stuff that can be done.

“This walkout is to show that the students have had enough, we’re not happy and more stuff needs to change.”

Highlighting what students are hoping to achieve, James believes scrapping the student contribution charge and greater security around student accommodation would be a step in the right direction.

Students at the Tallaght Campus, which has around 6,000 students, are struggling to attend college due to the financial constraints they are experiencing, according to Mr Curry.

“Scrapping the student contribution charge would be ideal, considering we are currently the most expensive third level education in all of Europe,” he details.

“Also, the fact is that student accommodation is so expensive.

“We’ve had students coming up to us since the start of the year, before they even came back, struggling to find somewhere to live and some had to defer by a year because they can’t afford to come to college.

“We currently have a campaign called ‘Don’t Drop Out, Drop In’.

“It’s for students who might not be finding college is for them, might be struggling or they want to defer, or possibly can’t go to college because of the cost of living crisis.

“So we have this service where they can come in and we’ll inform them of stuff they can do, or also telling them if you’re not happy or you want to share your experiences with the cost of living crisis, come to the walkout and you can speak out on this.”