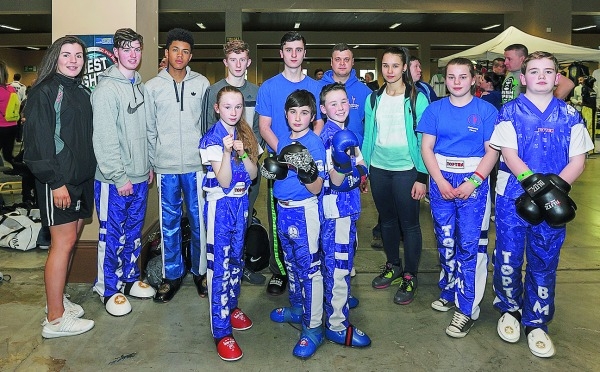 THE 2016 Irish Open International attracted no less than 4100 competitors to Citywest Convention Centre over the weekend.

This record number of participants, which represented 35 nations and included members of Tallaght Martial Arts and Bushido Clondalkin, competed in the likes of forms, points fighting, continuous fighting and full-contact ring sport.

Both local clubs certainly made their mark, with Tallaght MA finishing third on the overall club leaderboard behind Kiraly Kickboxing Academy in second and winners HMD Kickboxing Club Italia.

Indeed the performance of their members went a long way to seeing Ireland emerge the second highest scoring nation behind Italy after scooping a massive 37 gold, 37 silver and 56 bronze medals.

Supported by South Dublin County Council and Failte Ireland, the event is hosted and run by the Bushido Martial Arts Association under the guidance of the governing body of kickboxing in Ireland, KBI with proceeds raised going to the ISPCC.

This year again saw Tallaght MA competitors flood the podium with a huge number of title wins for their competitors.

Adam Condon made it a double after winning both the Older Cadets Points Fighting at -47kg and 52kg while Troy Gannon and Conor McGlinchey followed suit at -57kg and -69kg level respectively.

Jodie Browne topped the Older Cadets Points Fighting at -60kg while Dean Barry did likewise in the Senior Men’s -79kg as did Caradh O’Donovan in the Senior Women’s -55kg.

The latter combined with O’Keeffe and Nathan Kelly to emerge the top Young cadet team while the Older Cadet Team competition saw McGlinchey, Gannon and Condon link up to take third.

The biggest fighting tournament in the world proved a good test for the Bushido Clondalkin’s juniors who will be competing for Irish national kickboxing titles on April 10 in the hope of qualifying for the WAKO Junior World Champion-ships in Dublin from August 28 to September 4.

Karyna Nikitina took a bronze medal in the ladies -60kg division, losing by only one point to the eventual winner from Hungary.

As part of the organising committee, Nikitina’s found her warm-up preparations somewhat curtailed.

Determined to finish her last year as a junior competitor with podium finishes Shannon Gayson made the final of the Junior Girls +70kg only to bow out by two points in the final to a tough opponent from Team Wales.

The newly-crowned Mugendo Open junior champion Eoin Gorman also stepped up an age division to the Men’s Continuous -69kg class where he took a bronze medal after losing on a split decision to the eventual winner from Team Bristol.

Also fresh from her recent win in Sligo, Croia Byrne made it as far as the finals of the Girls Older Cadets +47kg.