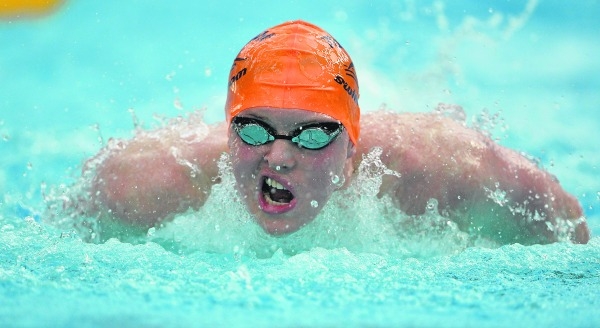 BRENDAN Hyland is sure that his superb 100m Butterfly victory in the Dave McCullagh Memorial/Swim Ulster International Meet in Bangor last weekend will leave him on a sound footing for this weekend’s British International in Edinburgh.

While he may have been somewhat disappointed with his 200m Butterfly time of 2:00.03 which was off the Olympic standard mark of 1:56.97, the Tallaght Swim Club star, nevertheless, scooped two gold and a bronze in Bangor and became the first Irish swimmer to break the 54-second barrier in the 100m Butterfly, clocking 53.59 seconds.

“It [the 200m Butterfly] was the first event of the weekend for me and I just think that nerves got the better of me.

“It is the main one for me, so it was a bit disappointing, but then my times in the 200m Freestyle and 100m Butterfly were really good.

“To do that showed that I can produce something really special in the 200m. It’s a game changer.
“Training has been going really well and I feel I’ll make a real go of it in Edinburgh this weekend” he insisted

Certainly his 100m performance in the McCullagh Meet was a significant improvement on his own Irish senior record of 54.21 in this event and was good enough to see him top the podium ahead of Conor Brines of Larne and Ards man Curtis Coulter.

Hyland started off the weekend with victory in the Men’s 200m Butterfly as he surmounted the challenge of University of Stirling pair Cameron Brodie and Duncan Scott who had to settle for second and third respectively.

He touched home in a time of 2:00.03 and he followed that performance up with a bronze medal win in the men’s 200m Freestyle final which was won by Scott on Day Two.

While he will be hoping to really push for Olympic qualification this weekend, Hyland will have several other opportunities includ-ing the Irish Nationals in April and the European Championships in London the following month.

There was plenty more for Tallaght Swim Club to celebrate by the close of proceedings in Bangor as Antoinette Neamt, Niamh Coyne and Clodagh Flood all made their presence felt.

The former enjoyed a strong start to the weekend, taking silver in the Women’s 400m Individual Medley behind Min Zhou of Shanghai.

The following day she stormed to victory in the Women’s 800m Freestyle contest, finishing up in 8:56.55 before clocking a win in the 400m Freestyle in which she found herself locked in a great battle with Rachel Bethel of Lisburn, before clinching the win in 4:17.93.

Having made the cut for the European Senior and Junior Championships, Neamt will be hoping for big things this year.

Her Tallaght clubmate Niamh Coyne also made her presence felt in Bangor with a runner-up finish in the Women’s 200m Breastsroke and third place finishes in the 100m and 50m event.

Clodagh Flood also made the podium with a third place finish in the Women’s 200m Butterfly while in the Women’s 4x100m Freestyle Team Relay, Tallaght emerged runners-up to Ards.