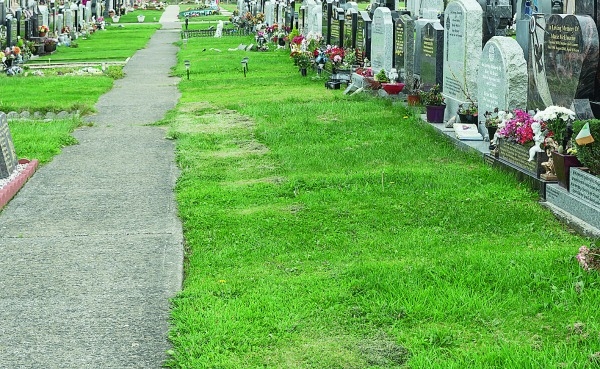 A TALLAGHT man has reported South Dublin County Council to the Gardaí for “desecrating” his father’s grave. Anthony Butler’s father is buried in Bohernabreen Cemetery which is run by SDCC.

After seeing that a lawnmower had disturbed his father’s grave, on September 12 last, he called to Tallaght Garda Station and reported the incident. He told a garda that he wants to prosecute SDCC for criminal damage.

Mr Butler says he does not understand why Bohernabreena cannot be kept in the same condition as Palmerstown Cemetery which is also run by SDCC.

Mr Butler said: “Bohernabreena is like a derelict dump, but Palmerstown is like an Axminster carpet. I don’t want somebody traipsing over my father’s grave. They have taken lumps out of the grave.”

Local councillor Deirdre O’Donovan has told The Echo that she is proposing a motion for this month’s Tallaght Area Committee meeting calling for an examination into why there is a such a difference in the upkeep of Bohernabreena and Palmerstown cemeteries.

She said: “I think it is a huge issue. If you have a loved one and you are tending the grave and then something happens. I think you are entitled to be upset about it. I will be bringing this motion before the next area committee meeting.”

The Echo contacted SDCC and they acknowledged that there is “a suggested issue in respect of the council’s management and maintenance of the cemetery, including the method and approach used to undertake routine maintenance works such as grass cutting”.

The spokesperson added: “It is further acknowledged that this has caused distress to those visiting their loved ones’ graves”.

The spokesperson said that SDCC is currently holding a complete review “of the management, operation, and maintenance of our burial grounds, including that of Bohernabreena.”

The spokesperson added: “Measures will be put in place on foot of the review to safeguard that Bohernabreena Cemetery is managed and maintained to the standard befitting the memory of all those loved ones buried in the cemetery”.