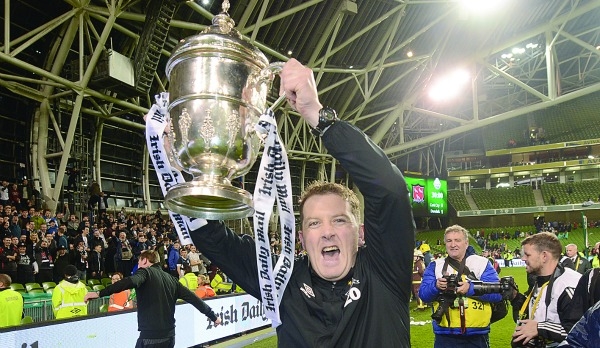 ONE OF the unsung heroes in Dundalk’s Airtricity League and FAI Cup double success is assistant manager Vinny Perth who had an influential part to play this year.

Perth, from Killinarden, has been assistant coach with the Lilywhites since Stephen Kenny, also from Tallaght, took over the manager’s job in 2013.

Vinny was obviously delighted that Dundalk made it back-to-back league titles last month and winning the double is an unbelievable achievement for a ‘wonderful’ team.

“It a great achievement, I don’t think we will appreciate how big it is winning the double until a few year’s time, but a lot of hard work has gone in to achieve the titles,” Vinny told The Echo.

“It’s a combination of three years hard work from the players, management and everyone at the club.
“We have worked hard all season and the side has formed a great team bond. We are really like a family now.”

It has been a great year for Dundalk who only lost one game in the league and won the cup for the first time since 2002. Vinny has the height of praise for manager Stephen Kenny.

“He has formed a great bond with the players and they are really like a team of brothers. It takes a lot for a manager to get that kind of feeling into a team. Stephen is very good at bringing a team together and getting the best out of the squad, which you could see this year.

“I have worked with him at Longford Town and Derry City and he was great at forming a good bond with teams and I am just lucky to be part of this success”.

On the final itself, Vinny feels that the conditions were not ideal but Dundalk showed their experience and fitness to get them past Cork City.

“It was not a pretty final and I’m sure it won’t be remembered as a good final and we have had much better performances this season. But to be far the lads dug deep, especially in extra time. It great to have secured the double,” added Vinny.

Perth believes the League Cup success in 2014 laid the platform for Dundalk’s success over the past two season.

“Winning the League Cup last year gave us loads of confidence. It was most of the players’ first time to win a trophy and it gave the team great confidence,” said Vinny.