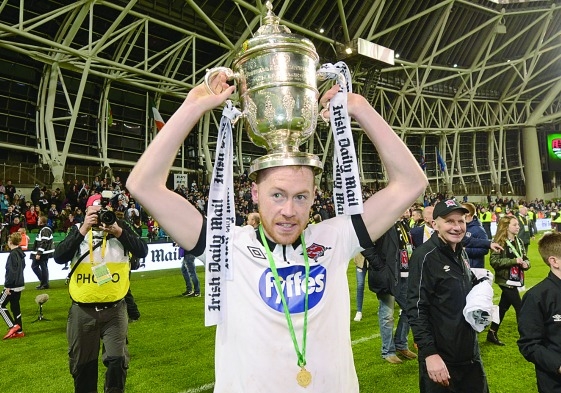 THERE WAS plenty of local involvement in Dundalk’s league and cup success this season and Clondalkin’s Chris Shields certainly played his part.

Shields helped the Lilywhites defend the league crown while the former Moyle Park College student had a big role to play in the destination of the FAI Cup final.

However Shields believes now that after doing the league and cup double the team can focus on Europe next year and finish off some unfinished business.

“It’s been a fantastic season for us – winning the league and cup double is just amazing,” he told The Echo.

“We had a great run in the league and cup but Europe did not go great for us. Next year hopefully we can focus more on Europe – we have unfinished business to complete,” he said.

The success for Chris “still has not sunk” but he is still enjoying every moment of it.

“Our objective at the start of the year was to defend the title and it’s a huge bonus to have won the cup. We only lost one game in 33.

Shield believes all the work has paid off for the players this season and they can hopefully continue the success next year.

On the final itself, Chris said: “It was not a classic final but it was all about just getting the right result. Our fitness kicked in during extra time and the goal was crucial for us. It was a brilliant day for the club. For the team it was great playing in the Aviva Stadium. It was also a great day for our families and friends,” added Chris.