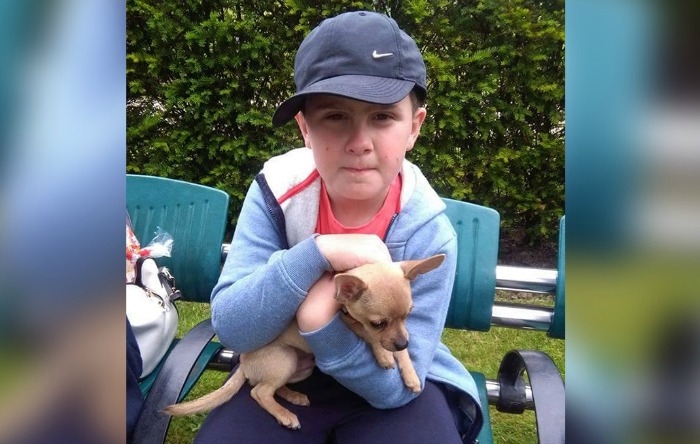 THE mother of a ten-year-old boy who has autism has appealed for the safe return of her son’s pet dog, and best friend, Mojo – who went missing from their Tallaght home last Friday, November 4.

Over the past week, Tara Matthews has been spending her days on social media and out in communities talking with people, contacting animal shelters and putting up posters in an attempt to find eight-month-old Chihuahua, Mojo.

Tara, who lives in Tallaght, told The Echo that Mojo escaped from the house last Friday at around 3pm and was gone for around five minutes before they noticed him missing.

According to sightings, a dog fitting Mojo’s description was picked up by two boys who are believed to have boarded the Luas from Tallaght with a tan Chihuahua and disembarking at the Kylemore stop in Ballyfermot.

“He’s like a rabbit, he just darts”, she told The Echo.

“I’m guessing he ran off the road and that’s when the two kids picked him up.

“I heard reports of a little dog running into traffic, so the two kids were probably trying to save him, but we would love for them to now let Mojo come home.”

Mojo, who is a tan colour with a white belly, was bought for Sean for his 10th birthday.

She said: “Mojo is Sean’s little friend, his little pal, and he comforts Sean when he gets upset.

“Sometimes Mojo is the only one who can calm Sean, I can’t even calm my boy the way Mojo can.

“Sean has been distraught since Mojo disappeared, he’s crying every day and cries himself to sleep every night.

“I’m doing everything I can to find Mojo. I’m searching every day to find my little boy’s dog and I’m begging whoever may have him to let him come home or even drop him into a local vets or a pound.

“I don’t care who took him, nobody will be in trouble – we just want him home.

“He means so much to us, but especially Sean, who needs him more than anybody.”

Tara is also appealing to anybody who may have bought a Chihuahua in recent days and may not have seen any of the appeals for Mojo, who is microchipped.

The family has also put up a cash reward for information on Sean’s pet companion, with anybody who can help encouraged to call 085 2360990 or email lost@dspca.ie