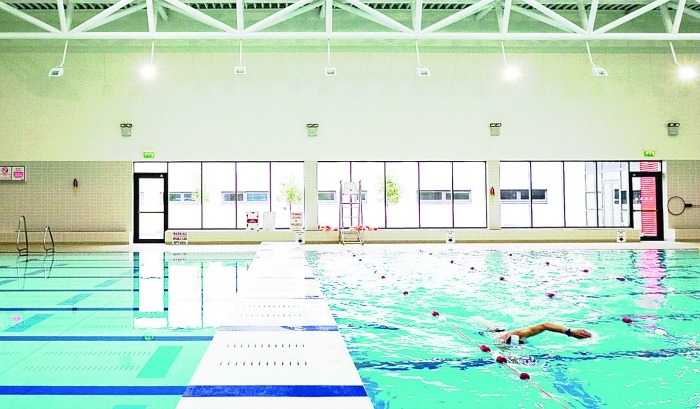 THE council is currently identifying ways to fix or replace the boom at the Tallaght Leisure Centre, with issues around the mechanical device having a detrimental impact on the members of a local club who are unable to swim the full length of the pool.

The award-winning leisure centre has for some time been experiencing problems with its boom, a mechanical device which is used to divide the pool into areas – with the boom acting like a wall that can be moved up and down.

Due to ongoing problems with the boom, which has seen the device stuck in the upward position for a number of months, the pool cannot be used for 25m swims – which is having a negative impact on the Fortunestown Swim Club and other local swimmers who need a place to train.

A spokeswoman for Fortunestown Swim Club told The Echo: “The boom has been constantly up since last June and is seriously impacting on anybody who needs to train.

“It’s really having a detrimental impact on us, especially on four of the kids who swim at national level.”

The spokeswoman added: “We were formed in 2010 and the Tallaght Leisure Centre has always been our home . . . we’d train there at least seven or eight times a week.

“The Tallaght Leisure Centre staff have been fantastic in recent months, keeping us up to date and trying to support us, but it is out of their hands now and in the council’s . . . we hope they come to a decision soon.”

Tallaght South People before Profit councillor Nicky Coules, who plans to meet the swim club, told The Echo: “This is a great community facility, but unfortunately it cannot be fully used due to the problems with the boom.

“This facility is hugely important to the people of the area and the clubs that use it . . . and the problem is seriously interfering with some of the clubs ability to train.

“In fairness we can’t fault the council, they are trying to find a solution, but a solution has to be found soon.”

Replacing the boom in the pool is expected to cost a six-figure sum, with the council currently examining “more cost-effective” solutions.

At a recent Tallaght Area Committee Meeting, council management said: “The council has received a report from the suppliers outlining the works required and an estimated cost.

“The proposed works include the design, manufacture, delivery and installation of a new boom. The estimate is significant and work is ongoing to identify solutions more cost-effective.”

Council management added: “Given the scale of the works, any solution will require a lead-in time of four to six months.”

The council stressed that the pool at Tallaght Leisure Centre continues to operate and deliver all swim options with the exception of the 25m lane swim.

Visit www.tallaghtleisure.com for a list of swimming times and -classes.