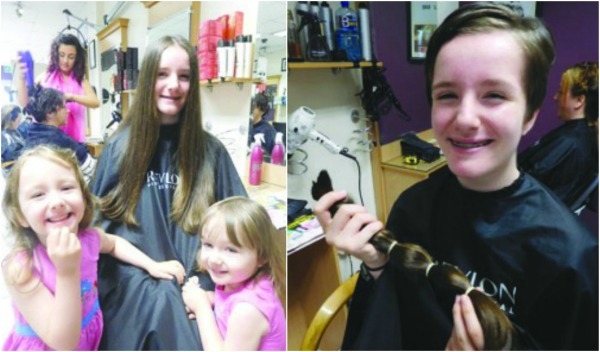 A 14-year-old from Tallaght raised over €1,000 and donated her long hair for the Rapunzel Foundation, which creates wigs for children who suffer with hair loss (alopecia), reports Laura Lyne.

Elizabeth “Lily” Brady, a student in Loreto Beaufort in Rathfarnham and a scholarship winning pianist in the Royal Irish Academy of Music, decided to donate her hair and raise awareness of the Rapunzel foundation.

Also a member of Fortunestown Swimming Club, Lily got her hair cut on Saturday in Kolours and Kutz in the Greenhills Centre.

She was joined by her two younger sisters, Ciara and Eimear Breslin, who called Lily’s long hair her “princess hair”.

A large number of donations for the Rapunzel Foundation came from Lily’s family, friends and neighbours, along with her school Loreto Beaufort.