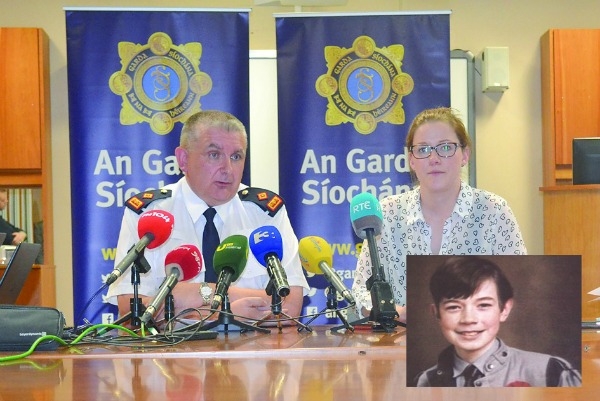 Gardaí appeal to public to come forward with Cairns information

GARDAÍ issued a fresh appeal on Wednesday at Tallaght Garda Station for information in the Philip Cairns investigation.

Over 160 lines of inquiry have been pursued by gardaí, after a victim of paedophile Eamon Cooke came forward to reveal she saw Cooke strike Cairns with an implement at his Radio Dublin studios which may have killed him.

Investigators believe young people may have been coerced into placing Philip’s school bag in the Ballyroan laneway where it was found after his disappearance in 1986.

Superintendent Peter Duff said they were appealing to young people, who are older now, to come forward.

He also commended the woman who recently came forward for her bravery.

Supt Duff said: “From our recent enquiries I believe there are people who were young at the time and may have information in relation to Philip’s school bag, and for whatever reason did not come forward.

“I am conscious that following to the passage of time and changing circumstances that these people may now be in a position to assist us. I want to reassure anyone who comes forward that they will be treated sensitively and discreetly by investigating gardaí.”

Cooke (79), who died earlier this month, confirmed to gardaí during recent interviews in a hospice that he knew Philip in the context of offering to bring and show children his radio station.

Ballyfermot woman Angela Copley, who supports survivors of childhood sex abuse, contacted gardaí to let them know Cooke was in the hospice, as it was “important to get someone to talk to him.”

Ms Copley was in contact with a woman whom Cooke had abused as a child, who told her that “a garda had told her someone had come forward to say she had thrown the schoolbag in the lane.”

Ms Copley said: “I got a phone call from a girl I support. She would have been successful in getting Cooke convicted the first time. In the course of the conversation, she told me about the girl and the schoolbag.

“The next morning, I rang gardaí, two days later they called back. It’s very unsettling. I’m recovering from colon cancer and really can’t afford to be doing this. Phone calls cost money. I’m on my old age pension, but when something comes up on Philip Cairns, I think God love his mother. Imagine not knowing. That’s why I do it.”

Philip disappeared on October 23, 1986 while walking back to Coláiste Eanna where he had been a first-year student. His bag was found in the lane six days later.

Supt Duff said fresh DNA tests are being carried out on the bag and they are awaiting results.

He said it is important for the sake of the Cairns family to bring the investigation to a conclusion.

Anyone with information is asked to contact Rathfarnham Garda station at 666 6500, the Garda Confidential Line on 1800 666 111 or any garda station.