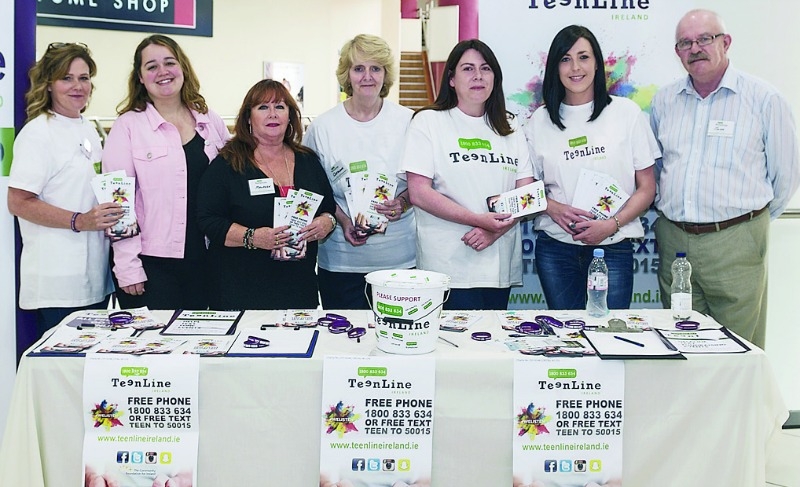 LISTENING charity TeenLine is currently recruiting new volunteers to man their call centre or to help out in the areas of office administration and fundraising.

Based in the Dominic’s Shopping Centre, Tallaght, TeenLine is a free-phone, free-text, confidential listening service for young people who need to talk – with a team of volunteers currently manning the service from 8pm to 11pm, 365 days a year.

The service was established by Tallaght mother Maureen Bolger following the loss of her son Darren to suicide in 2003, with the Kilnamanagh mam believing there was a need for a confidential service to help teenagers and young adults who may feel isolated, troubled or lonely.

Last Saturday, members of the TeenLine team took to The Square shopping centre to recruit new volunteers, with 25 interested people signing up.

Around 2,000 information leaflets were also handed out to shoppers.

According to John Casey, who is part of TeenLine’s voluntary admin team, all volunteers undergo training and supervised calls until they are confident on the phone.

He said: “We have lost a few volunteers recently due to the summer holidays etc. and have a team of around 30, which we hope to build up to 60 people.

“The recruitment drive on Saturday was brilliant and thanks to The Square for providing us with a space.

“Around 25 people signed up plus we handed out 2,000 leaflets with information on TeenLine.

“Anybody that can volunteer in any way at TeenLine whether that is on the phone, in the office or by fundraising is invited to get in touch.

“We have a great team here at TeenLine and everybody is working together to provide this important service to young people.”

To volunteer call the TeenLine office on 4622122 or visit www.teenline.ie for further information.

Any young person who would like to speak with someone is encouraged to call the TeenLine Freephone number 1800 833 634 between 8pm and 11pm, Monday to Sunday, or text Teen to 50015.