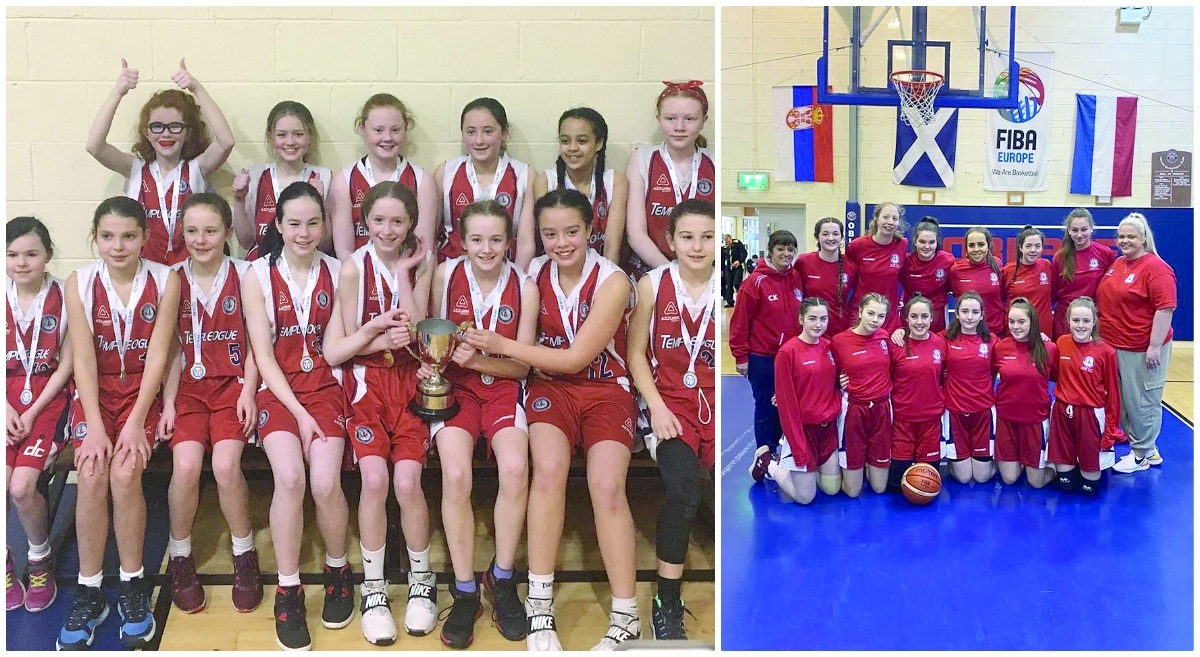 Templeogue girls make it a double

TWO out of three ain’t bad and that was the case for Templeogue Basketball Club who saw both their Under 17 and 12 Girls teams raised their respective Dublin Cup titles in the Oblate Hall last weekend while their Under 16s were pipped by Liffey Celtics in their decider.

It was a real battle right the way through between the Reds and Meteors in the Under 17 title match on Sunday, with Templeogue looking to exact revenge for reversals in their two previous encounters in the league earlier in the season.

While it was Templeogue who drew first blood courtesy of an early basket from Fiona Clune, Meteors quickly rallied and raced into a 9-2 lead.

Yet Ian Lynch’s side were not about to lose sight of the divisional champions and fought back to within one point by the end of the first quarter, thanks in no small part to captain Hannah Byrne who sank a big three-pointer before adding another basket.

League champions for the past three seasons, Meteors were missing the services of Under 18 Ireland international Ella O’Donnell and Icelandic player Olof Saevarsdottir.

Yet, with Aishling Marmion and Sinead Keane weighing in heavily on the scoring front, they made this one of the most exciting deciders of the Cup Finals weekend.

Coach Lynch opted to introduce a couple of younger players in the second quarter in Emma Garvey and Sara Howard who had suffered Cup Final defeat with the Templeogue Under 16s the day before.

They both registered scores as the Reds overtook into the narrowest of leads by the halftime break after which they enlarged that gap slightly to three, with Abbie Steacy and Tara O’Doherty both finding their range.

Templeogue looked to be coasting to victory as they opened up a 10-point advantage early in the fourth quarter, but Meteors were not about to be easily dismissed and battled their way back into a three point lead with two minutes remaining.

Still Templeogue maintained their poise as Aoibheann Ray mopped up a number of rebounds while Byrne converted all of her side’s four final free throws to help see them back in front.

Templeogue’s Under 12 Girls completed their march to Dublin Cup glory following a 38-19 point victory over Malahide in the final.

The Reds certainly hit the ground running, taking a 16-2 lead by the end of the first quarter.

The second and third periods proved much closer affairs with Annabelle Keavey, Rosa Knaggs and Laura Byrne working hard defensively while at the other end, Katie Behan, Grace Miley, Eabha Booth and Jodi Ryan were among the top scorers for the side.

Malahide produced a fourth quarter surge, but great rebounding from Sophie Kiely helped keep Templeogue out in front to the final buzzer.

Templeogue’s Under 16 Girls fought all the way, but ended up on the wrong side of a 49-30 scoreline in their Dublin Cup title match against Liffey Celtics.

The team lost too much ground in the opening half, at the end of which they trailed their opponents 32-9.

And despite a relentless display in the second half, that featured strong performances by top scorers Ashleigh Finn, Shauna Finn, Amira Elbharaoui and Laura Fleming, they were unable to make much in-road into Celtics’ advantage.