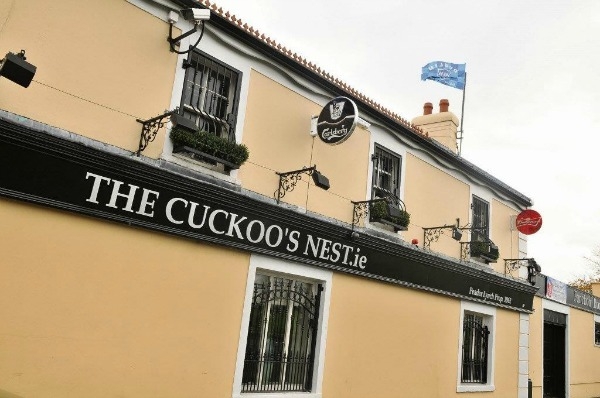 A PLAN to develop 40 houses at the back of The Cuckoo’s Nest could see the Lynch family return to roost in the iconic pub, with money made from the sale of homes being used against their bank debt.

In May of last year, the Lynch family, which has owned the Cuckoo’s Nest for the past 54 years, was forced to close the doors on the well-known Tallaght establishment, due to spiralling debts which were reported to be in the region of €3 million.

However, The Echo has learned that the Lynch family is working towards re-opening the iconic pub in the coming months – on the back of proposals to develop idle land to the rear of the Cuckoo’s Nest into a housing estate, the sale of which will be used to pay back the banks.

A source close to the family said that nothing is definite, but that talks are underway to develop land belonging to the Lynches into a 40-house estate, a move which the family hopes will see them return to the pub their parents Peadar and Phyllis bought in the early sixties.

The Echo understands that discussions are currently ongoing with the bank and that planning permission could be lodged with South Dublin County Council as soon as March.

The Lynch family is also looking to enter into negotiations with Tallaght Theatre, which, having 82 years left on a 100-year lease, is located at the back of the Cuckoo’s Nest carpark – and close to the site earmarked for development.

Aogan McGill, the chair of Tallaght Theatre, confirmed to The Echo that under proposals, the theatre has been asked to consider moving forward on the site, which would result in a new theatre being constructed closer to the main road, and in the vicinity of Boyle’s Sports.

Mr McGill said: “We have a pretty watertight contract, which covers for most eventualities.
“However, the Lynch family has been very good to us over the years and we would like to accommodate them as much as we can in their recovery.

“The Board has agreed in principle to the move, but we have to put it before members at our AGM on February 4.

“If the proposal is ratified then we will enter into negotiations, which involve Tallaght Theatre moving closer to the road.”

The Echo was unable to get specific details on the proposed development due to the project’s infancy.