The Echo Sports Star of the Month Award for January is accepted on behalf of Tallaght sprinter, Rhasidat Adeleke, by her mother, Ade from Thos McDermott, Co-ordinator, South Dublin County Sports Partnership and Stephen Leonard, Sports Editor, The Echo

The Echo January Sports Star of the Month: Rhasidat Adeleke

TALLAGHT’S Rhasidat Adeleke has been breaking more new ground for Irish sprint athletics since early on this year.

Competing for the University of Texas at the Clemson Invite in South Carolina in January, the Irish international sprinter recorded the fastest time clocked by an Irish woman over 300m on her way to second place in that race.

Indeed her finishing time of 36.87 marked the first time an Irish female athlete had broken the 37-second barrier as she surpassed the previous national indoor best over that distance held by Phil Healy (who recorded 37.56 back in 2017) as well as the top Irish outdoor time of 37.07 held by Karen Shinkins. 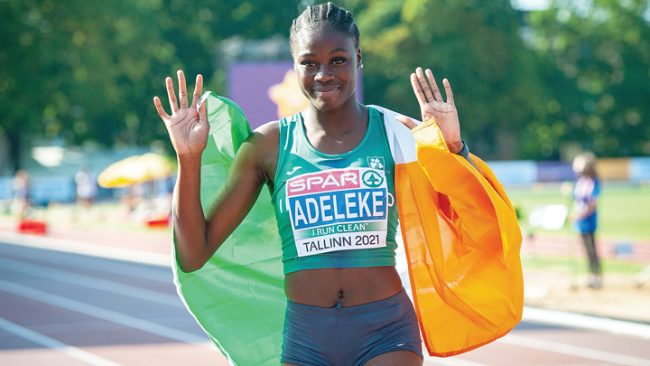 Her stunning time of 22.85 in the former at the New Mexico Collegiate Classic saw her become the first Irish female to break the 23-second mark as she finished runner-up to team-mate Kynnedy Flannel.

She then posted a blistering time of 7.21m over 60m to surpass the previous national indoor best of 7.23 set by Molly Scott only the weekend before.