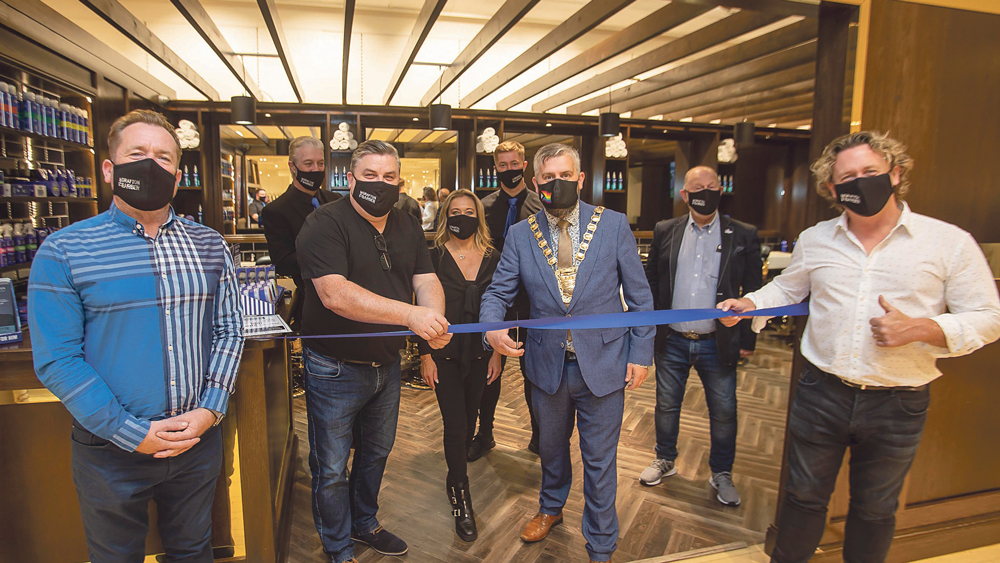 The Grafton Barber now at the cutting edge in The Square

THE GRAFTON Barber opened its first stand-alone unit within Dunnes Stores at The Square in Tallaght this week.

The development is set to be the first of plans to open more Grafton Barber stores within various Dunnes Stores locations as part of a move by the two companies towards upgrading their business model.

The move has led to the creation of seven new jobs in Tallaght.

The Grafton Barber is an Irish-owned family business run by brothers Hugh and Conor McAllister.

Their father Hugh Snr opened the first branch in Belfast in 1961 and moved to Dublin to expand the brand in 1974, opening the company’s flagship store in 1993 on Grafton Street.

Currently, they operate 48 stores nationwide and the UK, but that number is set to rise with the Dunnes collaboration, and plans by Grafton Barbers to expand further into the UK next year.

Speaking to The Echo, Hugh Jr said they were approached by the property team in Dunnes about the possibility of working together and were delighted to be associated with a household Irish name.

“A great man Keith believed in our brand and pitched the idea to have more services within Dunnes stores, like a ‘male crèche’, so we got together, drew up plans for a stand-alone kiosk that looks more like a shop within a shop, and the idea was born,” said Hugh.

“We now have exclusive plans to roll them out in Dunnes Stores nationwide and the vision of the team at Dunnes is light-years away from any competition. They provide the highest quality services from brands that are leaders in their game under one roof at an affordable price. The representatives of Dunnes stores in every aspect, from the cleaner and shelf stacker to the floor supervisor and shop manager, to security personal and staff in general, we couldn’t have asked for a better team to help us set this up. Both Conor and I are forever grateful.”

As for the store itself on Level 3 at The Square, the barbers wanted to represent their brand and service by going “all out on the fit-out”, which includes “solid oak shop, dressing units, herringbone floor, solid brass finishes, traditional Italian barber chairs, Belfast sinks and 60-inch TV screens.

Hugh continued: “As Covid restrictions are easing and we get back to some type of normal, we will be doing our traditional cuts, along with Royal open-razor shaving with hot towels, face massage, creams and colognes, beard trims and outlines, and offering our teas, coffees and soft drinks complimentary, giving clients what they deserve without paying crazy prices.

“Most of all valuing the client and how important they are. We wouldn’t have a business without them and that is why we are barbers to gentlemen and their sons.”