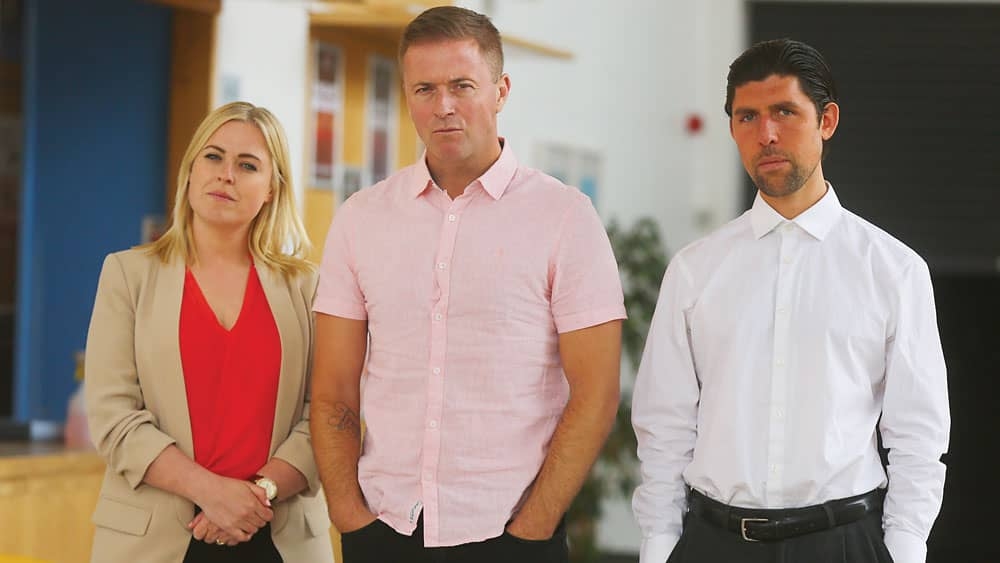 The Intruder: Local actors make a welcome return to The Civic

The Civic Theatre recently hosted an involving play about an infamous criminal who breaks into a crime reporter’s home and psychologically tortures him, and it’s set to be streamed online today, Thursday, June 10, at 9pm.

‘The Intruder’ was written by journalist and author Jason O’Toole.

The cast and crew recorded the performance last month, and it marked an exciting return to the stage for the performers following on from the impact of the pandemic on the arts industry.

Charlene Gleeson told The Echo about what it was like to tread the boards in her local theatre after many months away from the stage, and she detailed the tantalising tale that awaits viewers who tune into the stream.

What is ‘The Intruder’ about?

‘The Intruder’ is about an infamous criminal who breaks into a crime reporter’s Dublin suburban home in the dead of night and proceeds to psychologically torture him, with many twists and turns during the next 70-odd minutes, which is played out in real-time.

It’s apt that the criminal is actually called Old Nick, because the play’s action all unfolds during the Witching Hour.

Can you tell me about the characters in the play?

The play is a three-hander with the rehearsed reading featuring my brother-in-law Jason Barry of ‘Titanic’ and ‘Love/Hate’ fame as Old Nick, alongside Rex Ryan, who of course is the son of the late Gerry Ryan, as the reporter, and my good self as the barrister.

The cast on stage

What was your reaction when you first read the script?

Jason Barry had passed on the script to me, asking me to read it, and if I would be interested in doing a read over Zoom.

I knew it was going to be very good, because Jason O’Toole is a very experienced journalist and a best-selling author, but, honestly, I wasn’t expecting to be totally blown away by the language as much as I was. It’s very, very original.

I haven’t read anything as bonkers and as original in Irish theatre in such a long time. The three of us in the cast felt it has shades of ‘out there’ Irish black comedies such as McDonagh or McPherson.

It also reminds the guys of Tarantino’s ‘Pulp Fiction’.

What does it mean, to you, to have had the rehearsed reading held in a theatre in your hometown?

I’m so grateful to Michael Barker-Caven and Niamh Honer for supporting the project. It is a wonderful experience to tread the boards in your hometown at the best of times, but it’s extra special when you have such a fine theatre like the 300-seater Civic.

It’s one of the best theatres in the entire country, never mind just Dublin. So, for me to do this rehearsed reading at The Civic is probably, I’d imagine, how a GAA sports star feels when they pull on their county jersey. Dermot Marry, Louise Larkin, Sandra Keating and Tara Perry really pulled everything together for us on the day.

How did you feel about being back on stage?

I felt so lucky to be back on the stage after a year of everything being closed. My brother-in-law Jason Barry is just home from LA, after finishing up on a show called ‘Call of Duty’.

It was a nice moment sharing the stage with him, he really is brilliant at playing Old Nick.

What was it like to work alongside fellow Tallaght native Stephen Jones, who directed ‘The Intruder’?

Jason O’Toole first brought up the idea of getting as many locals involved in the production as possible, once he knew we were going to be filming at The Civic.

I immediately suggested Stephen and, as luck would have it, he was looking to dip his toes more into directing and saw our project as a great opportunity to test himself.

He really ‘got’ the script, and helped to bring out some brilliant performances in Jason Barry and Rex Ryan.

What can the audience expect from the stream of the rehearsed reading?

You can say it is only a rehearsed reading, but there’s been no expense spared on the production values, with it being recorded on three cameras, covering plenty of different angles to make the audience feel as close to the action as possible.

The sound quality is great too, with all the actors being mic’d, plus boom speakers above our heads, because we looked at other rehearsed readings and realised they’d failed because of poor sound quality.

We also have a superb new original music score with five new pieces of music recorded by legendary Irish musician Gerry Leonard, who was David Bowie’s guitarist and co-writer on three of his later albums, including the iconic ‘Next Day’.

‘The Intruder’ will be streamed on today, Thursday, June 10, at 9pm HERE.