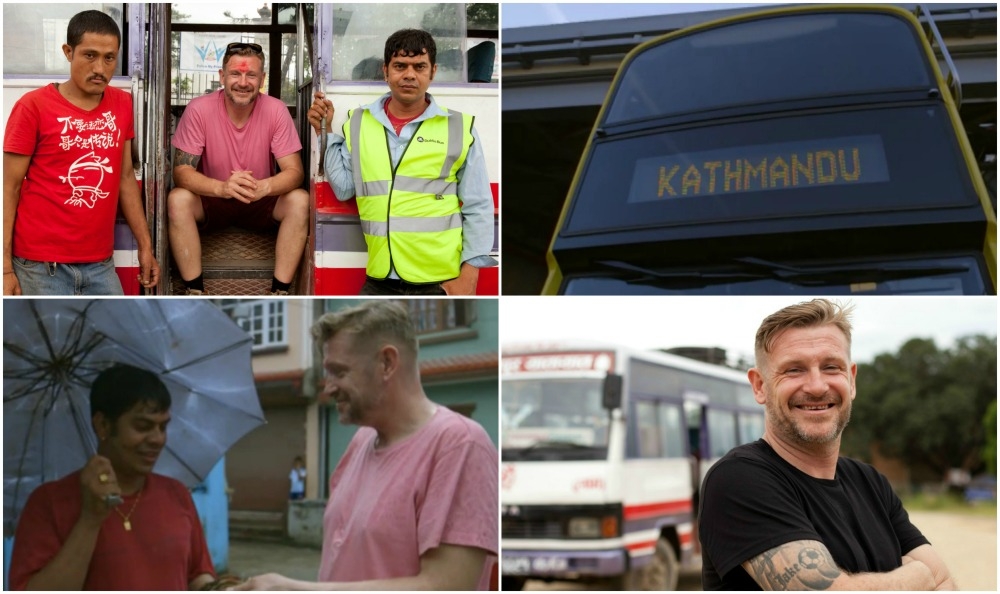 Ballyfermot man Christy Carey featured on RTE’s Toughest Place To Be last night, and despite having to drive a bus on some of the most chaotic roads possible, he handled it all with a smile and some of the best Dublin charm you are likely to see.

Normally driving the number 27 Dublin Bus route, Christy flagged the Walkinstown roundabout as he most difficult daily challenge, but nothing could have prepared him for the manic and often dangerous streets of Kathmandu in Nepal.

Promising to bring some of the ‘Christy charisma’ with him on his travels, the loveable father of three arrived in the third most polluted city in the world and was instantly taken aback by the devastation caused by the 2015 earthquake, which killed up to 18,000 people.

“It’s only when you’re on the site that you actually see the devastation, you see the rubble on the ground, it goes to show you how much damage was done,” said Christy on his arrival to the city centre in Kathmandu.

The Ballyfermot man lived with a local family while on his trip, and it was here he met Jaihram, a bus driver who works every day to support his family.

“They are lovely goats love”@RTEOne #Nepal #Katmandu Christy is a great sport-“Get the council to sort out your roads!!” #ToughestPlaceToBe

#toughestplacetobe Health and safety me bollix

#toughestplacetobe have ye got a life jacket..size of them potholes. #Kathmandu

Christy is having a ball, although he’s missing the extra features his Dublin Bus offers #ToughestPlaceToBe

Thrown in at the deep end, Christy hopes to drive Jaihram’s bus on his final day, but first he has to pass the test, and the bus he’s operating is far from state of the art.

With no handbrake and a 16-year-old gearbox, Christy takes a little while to find his feet, but like any good Dublin Bus driver, he perseveres and gets the bus on the road.

#ToughestPlaceToBe ahh Christy is some man .. getting stuck in and charming everyone with his Irish humour.

RTÉ have really hit it out of the park with #ToughestPlaceToBe. Great TV, great casting.

After much hard work he gets to grips with the clutch and gearbox, and once he gained his confidence, he may as well have been navigating his way through the busy streets of Dublin city centre as he works 14 hours straight in some of the most chaotic driving conditions imaginable.

There was much love for Christy online, and his infectious sense of humour and positive approach to a difficult situation had many praising his efforts.

Great character that lad, he’s the only bus driver I’ve came across that isn’t a prick #ToughestPlaceToBe

Fair play Christy No 27 will be a walk in the park @RTEOne @dublinbusnews #ToughestPlaceToBe great programme , Christy is a star

I don’t think I’ve ever been more inspired by a person. Christy comes across like such a genuine, decent human being. #toughestplacetobe

#ToughestPlaceToBe was brilliant! Christie is some character and representing Dublin & Ireland brilliantly #therelovelygoats

Christy Carey is an absolute credit to Ballyfermot. Honoured to say I know the man well. Great man with a great family #toughestplacetobe

Christy is an absolute gent. Language wasn’t a barrier. People could feel the warmth of his personality #ToughestPlaceToBe

We are so proud of Christy. Fantastic attitude, complete gentleman and a great ambassador for Dublin Bus #ToughestPlaceToBe

Dublin Bus will be supporting Christy with his fundraising efforts. More details will be available in the coming days. #ToughestPlaceToBe

Christy is hoping to raise money for the local family he stayed with while on his trip to help them rebuild their farmhouse, and Dublin Bus have said they will share details of his fundraising efforts in the coming days.