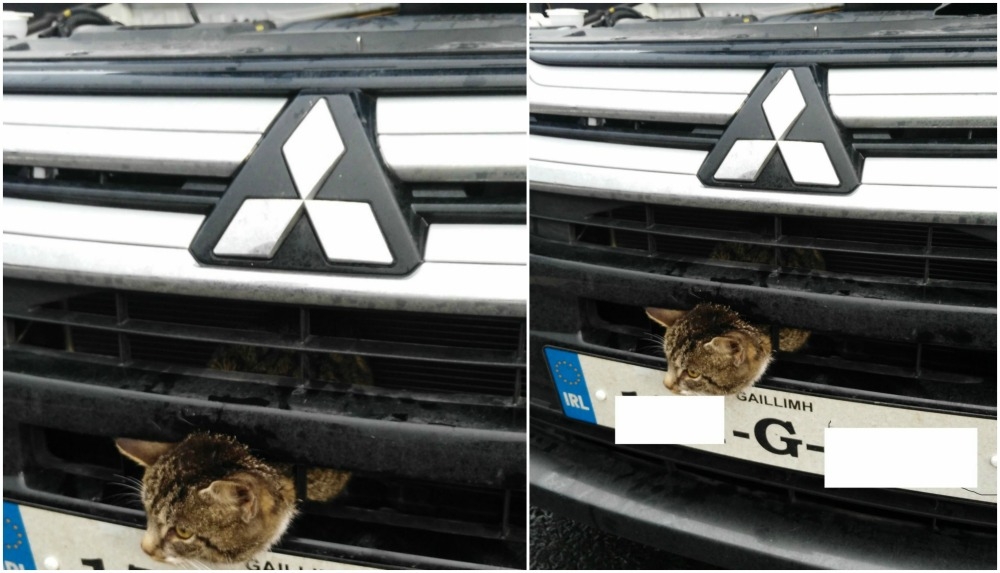 There was nearly a cat-astrophe on Irish roads this morning

This little kitty was caught speeding on the motorway this morning, but thankfully, after some dismantling, she was rescued.

According to gardai the driver of the car was unaware of the cat stuck in the front of the vehicle that was travelling on the N17 in Galway.

The cat’s head was wedged in the front grille, and the driver only became aware of the cat when stopped by gardai.

Sharing the images via the official garda account, a garda spokesperson said: “One Lucky Cat caught speeding by Galway Traffic on N17.

“Traffic Corps Galway met this little fella in oncoming traffic. Driver unaware, thought he was getting stopped for speeding!!

“The cat’s head was wedged in the grille but after some dismantling she was rescued by Garda motorcyclist uninjured!

“She survived a few miles of a journey like that but the car heading for Co. Clare!! One Lucky cat, Captions suggestions pls.”

It didn’t take long for people to get back to them with captions either, with some being really cat-astrophic (we’ll get our coats).

@GardaTraffic “This engine was purring”

@GardaTraffic are there “cats eyes” on that road?

@GardaTraffic It could have been a catastrophe…

@GardaTraffic is it an offence to mess with the Cat-alythic converter!!