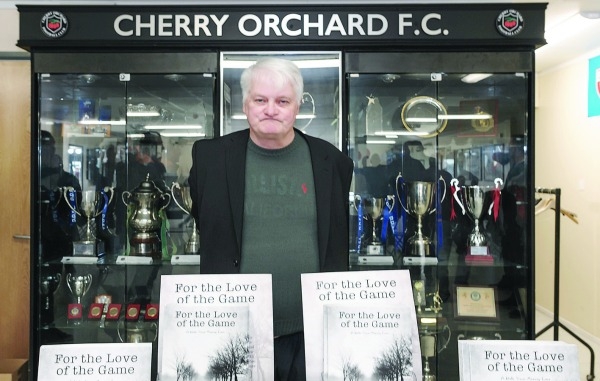 A BALLYFERMOT man has launched a book covering a fascinating 30-year period of local football tournaments.

Paul O’Brien, a key figure in five- and seven-a-side leagues in the 1970s, ‘80s and ‘90s, launched “For the Love of the Game” at Cherry Orchard Football Club on Saturday.

The Kylemore resident conducted extensive research over the last number of years, interviewing players around the country, collecting photographs, and generating finance to compile the book.

The 100-page monochrome special is packed with photos, tributes, reflections, and stories.

FAI chief executive John Delaney and St Pat’s director Phil Mooney both provide forewords, with John Delaney writing: “I am delighted that Paul has chosen to capture these and other wonderful memories in this book.

“Ballyfermot has a rich football heritage and has produced many great players, coaches and teams over the years. I think every football fan will enjoy reading this book.”

For the Love of the Game is €10 and available to buy at Cherry Orchard FC, Ballyfermot Library, McDowell’s Pub Inchicore, or at Paul O’Brien’s home address at 65 Kylemore Drive.