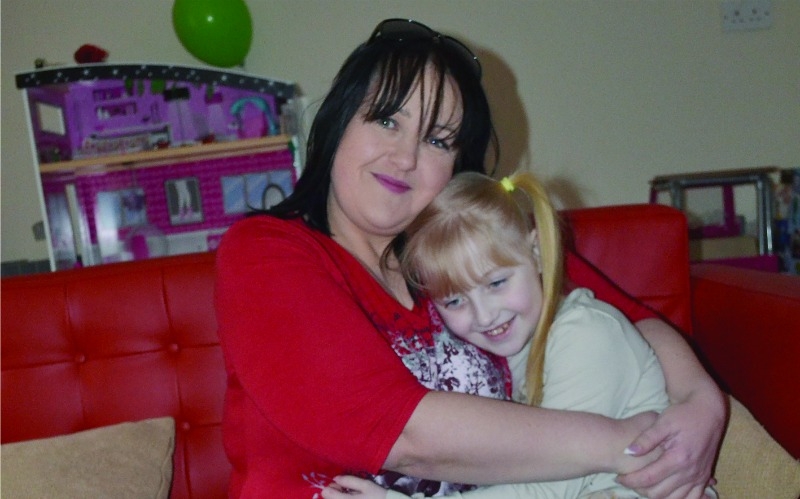 Tallaght mother campaigns for CF drug to help her daughter

A TALLAGHT mother is fighting for her daughter’s life by calling on the Government to approve a Cystic Fibrosis drug, which could give her nine-year-old a future without limits.

Siobhan Brophy, from Belgard, is on a committee of parents lobbying the Government to fund an FDA-approved combination therapy drug called Orkambi, which Siobhan believes will give her daughter Saoirse “a life”.

Saoirse, who is a bright student in Solais Chríost in Belgard, was diagnosed with Cystic Fibrosis (CF) at the age of two.

An inherited chronic disease, Cystic Fibrosis affects the lungs and digestive systems of about 1,200 children and adults in Ireland, with the condition causing the body to produce a thick and sticky mucus which clogs the lungs and leads to life-threatening lung infections and serious digestion problems.

For Saoirse, daily life includes physio and six different types of medication, before she leaves for school each morning, the ingestion of special enzymes before she eats anything throughout the day, followed by more medication and time on a nebuliser.

However, there is an FDA-approved combination therapy drug called Orkambi which, available in the US, France and Germany, could enhance Saoirse’s quality of life and increase her life expectancy.

Also campaigning for Government funding, CF Ireland has said that the drug has the potential to lengthen lives, increase quality of life and delay the need for lung transplantation – with Orkambi the first drug to impact on the underlying cause of Cystic Fibrosis for 60 per cent of the CF population in Ireland.

Speaking with The Echo, Siobhan said: “A group of parents have gotten together because we don’t feel that we are being heard when it comes to Orkambi.

“This drug can give Saoirse, and other kids like her, a future and take the life expectancy off her.

“It can let her live the life she wants, which is on the Galapagos Islands – she’s mad into animals and conservation.

“It would impact on her daily life and significantly reduce the amount of time she has to spend in hospital, she could do a full year in school, go to college and hold down a full-time job . . . anything would be possible.”

Siobhan and a number of other parents are bringing their campaign to the Dáil on December 1, when they will address a cross-party selection of TDs and Ministers – telling them the personal stories behind the call for Orkambi.

“We manged to swing a meeting with Gerry Adams,” Siobhan said.

“And Sinn Féin, along with the committee of parents, feel that support for our children should be non-party political and that cross-party involvement is vital in obtaining Orkambi – and to stop Cystic Fibrosis being a death sentence.

“The drug is presently being reviewed by the HSE with no word on a determination, with finance appearing to be the major obstacle in its path.”

Orkambi will not work for all strains of Cystic Fibrosis, but it is believed that more than 650 sufferers living in Ireland, including Saoirse, could be given a new lease of life with treatment.

The committee of parents will present to a cross-section of politicians on December 1, followed by a protest outside the Dáil on December 7.

The Department of Health previously told The Echo that these decisions are “not political or ministerial decisions”, and that Orkambi is currently being considered by the HSE under the national medicines pricing and reimbursement assessment process.