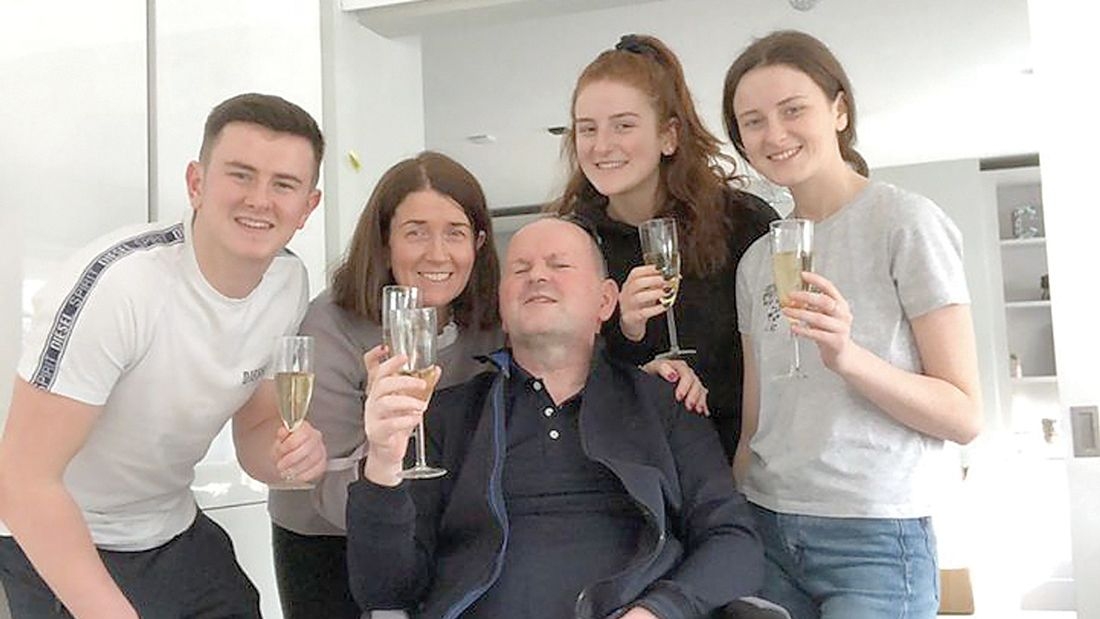 LIVERPOOL fan Sean Cox returned to his family home for the first time in almost two years last weekend after suffering life-changing injuries in an attack while heading to Anfield for a Champions League match.

From Clondalkin, Sean was heading to the Champions League semi-final with his brother Martin when they were attacked by away fans in April 2018. An away supporter was jailed for their involvement in the incident.

Sean Cox with his wife Martina and family

Sean was left with serious head injuries that required him to be placed into an induced coma at the Walton Centre in Liverpool.

He was subsequently transferred to a Dublin hospital, then he was cared for at Dún Laoghaire Rehabilitation Hospital, back in the UK and finally Marymount in Lucan.

Sean, who is originally from Monastery Road, has received plenty of support from the local public and his own old club Round Tower, Clondalkin played a charity match last year as part of the fundraising drive.

In a statement released on Support Sean Cox it said: “For the first time in almost two years, the Cox family are finally reunited under one roof as Sean makes a long awaited and welcome return to his home in Dunboyne.

“Sean’s journey over this time has been challenging and difficult, however today is an important and positive milestone for Sean and his family.

“While Sean will continue to require full-time care and ongoing rehabilitation for the foreseeable future, today is definitely a day to enjoy.”

Sean’s wife Martina, commenting on his return home, said: “This is a day we as a family have been looking forward to for a long time. While Sean still has a long road to travel, having him home with us is an incredibly important step as we come together as a family unit again.

“I can’t thank enough those who have helped Sean along the way over the past two years. Without a doubt this support has made today possible.

“In particular, I would like to thank the incredible staff in Marymount Care Centre in Lucan for the care and support they have provided to Sean over the past number of months.”

At a time when staying at home takes on new meaning for all of us, it’s clear that there is no other place that Sean would rather be.