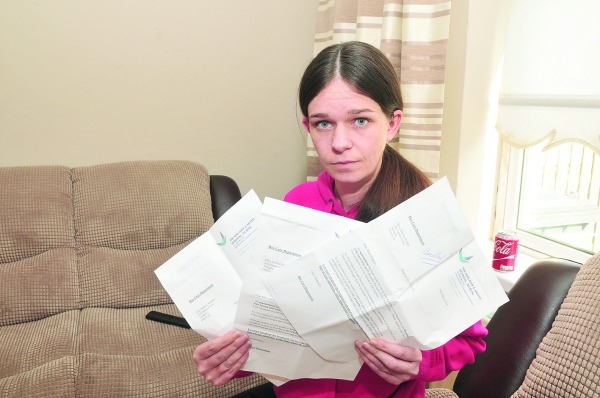 A MOTHER of three who has been waiting almost three years for a 30-minute operation has been left frustrated and stressed after her operation was cancelled three times in the last three months as she arrived to Tallaght Hospital for the procedure.

Twenty-eight-year-old Sebrina Murphy, who lives in Jobstown, has been waiting since December 2013 for a procedure on her back to prevent the growth of a painful cyst which can cause her intense pain for long periods of time.

She previously had an operation over seven years ago which proved unsuccessful, and has been living with the painful ailment which prevents her from living her day-to-day life and can develop at any time.

Sebrina told The Echo: “I feel so stressed out with it all, I get so nervous in the build-up to the day and then to go into the hospital and be told it’s cancelled, it’s ridiculous.

“My baby’s christening was supposed to be this Sunday, but we cancelled it as I was expecting to be healing from the procedure, only to be told that it was cancelled.

“I have the baby’s christening blanket made up with the date, and now it can’t even be used when we have the christening in June.

“I’m now due to have the procedure on May 9, two weeks before one of my other children has their communion and I just have to hope that I’ll have healed in time for it. It’s usually a six-week healing process.

“It causes me so much pain, it’s so sore when it flares up. I can’t sit down, I pretty much can’t do anything and have to lie on my side.

“The appointments were for February 29, Mar 13 and April 11 and they were all cancelled. I can’t take anything like antibiotics or prescriptions for at least six weeks before, and the operations are all being organised with less then six weeks notice.

“I was told a letter was sent out to me cancelling the last operation, but I never received it. Eventually the consultant told me that the hospital didn’t have a bed for me.

“I don’t have confidence that it will go ahead on May 9 and this will just continue. It’s ridiculous.”

A Tallaght spokesperson told The Echo: Tallaght Hospital has experienced the highest numbers of patients presenting to its Emergency Department (ED) in the first quarter of this year since the hospital opened. This has resulted in higher admission levels which in turn impacts on all other activity levels in the hospital.

On a small number of occasions when demand for beds has exceeded capacity, non-urgent elective admissions are cancelled. This is only done as a last resort and as a result can be at short notice. The hospital regrets the inconvenience to patients and their families and works to reschedule postponed patients as quickly as possible.

The hospital has implemented a number of initiatives to ease patient flow which has assisted in reducing the impact of the increased demand from ED.