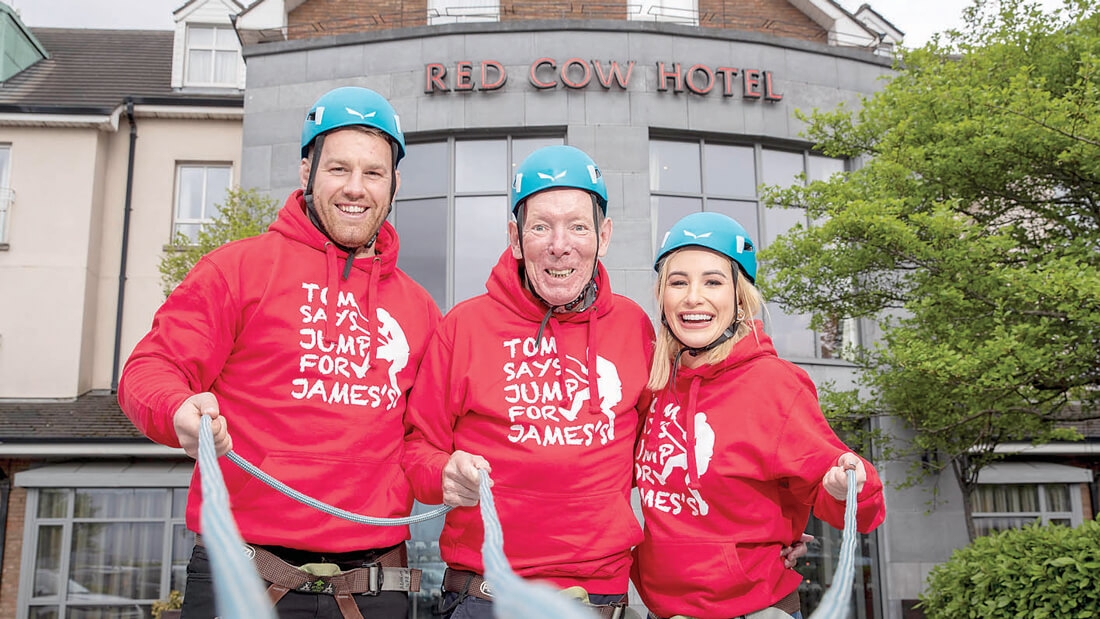 Tom Moran to abseil off hotel to raise €200k

To mark the third anniversary of his near-fatal brain injury, CEO Tom Moran will abseil off the new nine-storey extension at the Red Cow Moran Hotel on Sunday, June 2.

Tom was joined at the official launch on Wednesday at the Red Cow Moran Hotel by Leinster and Ireland rugby player, Sean O’Brien, and country singer and Dancing with the Stars finalist, Cliona Hagan, to ask 200 thrill-seekers to join the ‘Jump4James’ Abseil Challenge.

Tom’s goal is to raise €200,000 towards building a dedicated Brain Disease Resource and Research Centre at St. James’s Hospital under the direction of Neurology Consultant, Dr. Colin Doherty. Tom’s wife and children will also take part in the Challenge.

In June 2016, a stroke caused Tom to fall while on holiday in Spain which caused a significant injury to his head. He underwent a craniotomy and spent six weeks in an induced coma in Carlos Haya Regional Hospital in Malaga, Spain, before being airlifted to St James’s Hospital under the care of neurologist, Dr. Colin Doherty.

From the outset, the outlook was very bleak and Tom was not expected to survive. His family were told that if he survived, there was every possibility that he would require care for the rest of his life. The damage caused to his head was likely to result in him being brain damaged, blind and paralysed. Three years on, Tom has defied all odds and has made an incredible recovery.

Tom’s daughter, Tracey Moran, Director of Communications at Red Cow Moran Hotel says: “While a lot of my dad’s recovery can be attributed to his sheer determination and strength of character, he could not have done it without the initial care and attention given by Dr. Doherty and the neurology team at St James’s Hospital and rehab in Mercer’s Institute for Successful Aging (MISA) in the hospital.

“He spent almost a year in hospital, a total of 312 days.

“It has been a tough journey but my dad has had so many well-wishers and supporters coming forward and people sharing their own health related stories, which has been a huge comfort to him and our family.

“Despite dad’s prognosis the family always remained positive, in fact Dad was only six months into his recovery when my brother, Michael, came up with the idea of abseiling off our new extension to help raise funds for the hospital and as a way of thanking everyone for their support.

“We are delighted to be finally turning this idea into reality and facing the big jump together!”

You can sign up as a group (corporate, club or friends) or as an individual.

To secure a place on the abseil and to cover the costs for same, the registration fee is €65.

Participants must also raise a minimum of €300 in fundraising to take part and help Tom reach his goal of €200,000.