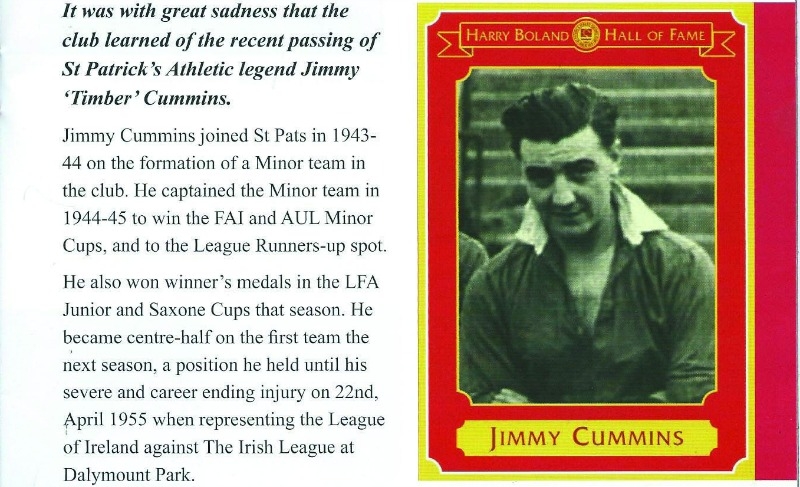 TRIBUTES have flown in for former St Patrick’s Athletic footballer James ‘Timber’ Cummins – who passed away on October 12.

The Ballyfermot great-grandfather won a League of Ireland winners medal with the Inchicore club in 1951-52.

Timber also picked up a host of minor and senior awards before injury cruelly cut short his career in 1955, whilst representing the League of Ireland against the Irish League at Dalymount Park.

A tribute by St Patrick’s Athletic stated: “It’s with great sadness we learn the passing of Jimmy ‘Timber’ Cummins. Jimmy Cummins joined St Pats in 1943-44 on the formation of a minor team in the club. He captained the minor team in 1944-45 to win the FAI and AUL Minor Cups, and league runners-up.

“He became centre half on the first team the next season, a position he held until his career-ending injury on April 22, 1955, when representing the League of Ireland against the Irish League at Dalymount Park.

“He was capped against the Scottish Junior and Lancashire Leagues and his successes with the Saints include LFA Senior Cup winner 1947-48, four Leinster Senior League winner’s medals, 1948-51, a League of Ireland Championship medal in 1951-52, two President’s Cup winner’s medals, and two Inter-League caps.”

Jimmy was inducted into St Patrick’s Athletic Hall of Fame in a ceremony held in 2009.

A funeral service took place at the Church of Our Lady Assumption on Saturday.

James was a beloved husband of the late Margaret, and is sadly missed by his daughters Anne, Mary, Jean, Yvonne, Sandra, Cathy, Karen, Belinda, son Charlie, and extended family and friends.