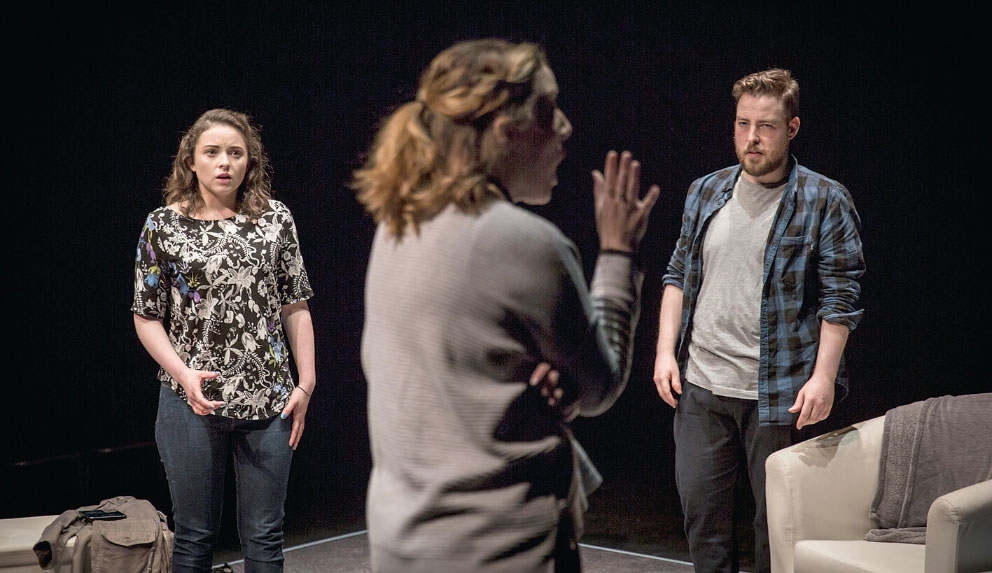 DAVEY KELLEHER Director and Theatre Maker is one of the most active and diverse theatre makers in contemporary Irish theatre.

Davey has been resident at The Civic for the past nine months and is an artist with so many strings to his bow.

He has been exploring not only his own craft but in partnership with our Artistic Director, exciting and timely ways in which other emerging artists can be included in the expanded family at The Civic.

Already The Civic has seen the fruits of his talents through a partnership with Idir Mná and the presentation in March of a daring re-telling of the timely story of Mamie Cadden called ‘Our Lady of Last Resort.’

In the meantime The Civic present ‘Tryst’, a piece close to Davey’s heart which is run in conjunction with Sickle Moon Productions from May 15-19.

Matt and Steph are hungover. Their wedding is in a week. Things are under control. Mostly.

But when their best friend Rachel arrives unannounced, she reveals a secret that threatens to unravel everything.

Now they must deal with the consequences of their messy nights and bad decisions.

Who do you blame when your life is derailed? And how far will you go to get it back on track?

“My residency has been focussed on building relationships and growing new work, in collaboration with other artists, that can engage with our community today,” Davey told The Echo.

“One particularly exciting collaboration has been with Sickle Moon Productions, producing a revived staging of their play, TRYST, by Jeda De Brí and Finbarr Doyle, directed by Jeda de Brí. The show deals with a couple, six days before their wedding, grappling with a bombshell dropped by the maid of honour that threatens to unravel all of their lives”.

A blistering new play written by Finbarr Doyle and Jeda de Brí; ‘Tryst’ explores the price of curiosity, the limits of friendship and the complications of sex. Tickets are priced at €16 & €14 concession